A Kentucky-based nonprofit born as a result of the coronavirus pandemic is hand-delivering groceries and other essential items to community members who otherwise can't get to a food pantry.

They began delivering groceries and other essentials to people experiencing poverty and food insecurity as well as those with chronic health conditions who were unable to leave their homes due to the virus.

It was never just about delivering groceries.

"A much bigger company like Amazon could deliver food boxes to a lot more people than we ever will, but we're really trying to build a community where people look out for each other and share resources, outcomes and dreams."

By facilitating access to critical goods with the help of community members, the duo hopes to create a community, if not a world or a country where everybody has what he or she needs to live a healthy life.

Merritt and Accardi partnered with numerous local organizations that could help point them to people in need. In one instance, Merritt recalls a woman who had cancer and her oncologist talked to a social worker and said she was not eating what she needed.

By August, the duo, equipped with donations from people in the community, made their way to a local grocery store and embarked on their first delivery.

Since then, they have been receiving droves of donations, helping them to feed dozens of what Merritt and Accardi call their "neighbors."
F

What is the meaning of kindness?

Kindness is defined as the quality of being friendly, generous, and considerate.

But kindness means so much more.

Kindness can mean different things to different people. The meaning is in how you choose to show it. Be it through empathy, acceptance, kind gestures, thoughtfulness, the possibilities are entirely up to you. Kindness might look like being helpful or showing empathy. It may mean doing nice things without expecting nice things in return

Kindness is more than being nice.

Kindness goes beyond merely being nice. Would you prefer people to describe you to be "kind" or "nice?" There can be a lack of sincerity in just being nice; there is often a perception of doing the minimum. Whereas, being kind is doing intentional, voluntary acts of kindness. Not only when it’s easy to be kind, but when it’s hard to be.
F

We are not all in the same boat. We are in the same storm, Some have yachts some have canoes, some are drowning. Reach out and help whoever you can.
Last edited: May 22, 2021
F

A few years into his work as a kindness motivational speaker, Houston Kraft met Helga on a flight.

She told him the last time she flew, it was because her father was ailing. Upon arrival at her destination city, she received word he had died.

She sank to the floor in the airport and wept for two hours, and not one person stopped to help.

In that conversation, Kraft realized he, too, a sought-after kindness expert, might have passed her by.

That encounter taught him to ask: What gets in the way of our being kind?

He arrives at: incompetence, insecurity, and inconvenience. His book is organized around these barriers, with kindness exercises to take readers to the determined, practiced, habitual kindness he believes will change the world.
Last edited: May 23, 2021
F

Kindness is a behavioral action that others can see (aka a social signal). It has the qualities of affection, warmth, and playfulness. When we are kind, we are able to admit our wrong doing and reconnect with others. Kindness models openness and humility. This allows us to question oneself and stay engaged with others to promote social connection. Kindness allows us to emphasize the wonderfulness of diversity while living within our own values. It also promotes us contributing to the well-being of others, without expecting anything in return.

Compassion is an inner experience. It can be directed toward another person or group, or it can be directed inward (self-compassion). Compassion is characterized by the qualities of sympathy, empathy, and concern. It emphasizes nonjudgmental thinking toward self and others, validation, distress tolerance, and acceptance of what is occurring. Compassion is oriented toward healing, alleviating suffering and acknowledging that all humans suffer.
F

Kindness refers to feeling others as an extension of yourself, and taking joy in doing good for them.

Kindness means serving and giving, and enjoying it for the act itself. Kindness covers several other virtues and is the foundation of them all. These virtues include consideration, generosity, selflessness, compassion, service, sensitivity, friendliness, cooperation etc.

Kindness and its related virtues form the core of the social fabric of our society. Kindness is one of the best ways to experience something that is larger than you.
F

A lot of hair

"Goodness is about character - integrity, honesty, kindness, generosity, moral courage, and the like. More than anything else, it is about how we treat other people." -Dennis Prager

"A tree is known by its fruit; a man by his deeds. A good deed is never lost; he who sows courtesy reaps friendship, and he who plants kindness gathers love." -Saint Basil

Carry each other's burdens, and in this way you will fulfill the law of Christ.
F

"For beautiful eyes, look for the good in others; for beautiful lips, speak only words of kindness; and for poise, walk with the knowledge that you are never alone." ~ Audrey Hepburn

"Together we can change the world, just one random act of kindness at a time." - Ron Hall

"This is my simple religion. There is no need for temples; no need for complicated philosophy. Our own brain, our own heart is our temple; the philosophy is kindness." ~ Dalai Lama 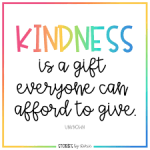 Suprapto and his wife, Kartini, were Javanese Christians who moved into a neighborhood in Jakarta where all the other residents were followers of Indonesia’s majority religion.

Wanting to become friends with her neighbors, Kartini baked cakes and took them to the families on either side of their tiny house. But their gifts were thrown onto garbage heaps at the edge of the dirt path, accompanied by ugly words of rejection and dismissal.

The witness of this soft-spoken, unassuming man as he told his story and his wife’s story to fellow Baptists in their small church was hesitant, even shy.

He related that each Sunday morning, as he and his wife and their children walked out of the neighborhood, carrying their Bibles on the way to worship, men followed them with threatening insults and shouts of disdain, sometimes standing together, threateningly, to block the narrow passage.

Over time, the taunts and tension faded away, yet friendship seemed illusive.

As Suprapto and Kartini continued to act neighborly, something remarkable happened.

After four years, they not only had established several friendships, but often — sometimes each week — neighbors would come to their house to ask for advice about their marriages or to seek help with their children. In the words of this Javanese miracle worker: “They join with us to patch our leaky roof during rainy season. They deliver greeting cards whenever we celebrate our sacred holidays. They invite our Christian children into their Muslim homes. They bring us cakes.”
F

Doing kind things for others can also increase your happiness and sense of satisfaction, according to a 2016 Oxford University study. "When we are kind, the brain reacts positively and similar to simple pleasures, we get chemical releases such as serotonin that can promote a positive mood," Hughes says. Dopamine also rushes through the body, and the brain signals "a particular type of elation" as a result. This is known as a "helper's high."

So find ways to give back to others. It could be as simple as being present and listening to a friend or colleague, it could be a random act of kindness like making someone coffee, or you can go out there and volunteer. When you do good for others, you do good for yourself.

Be kind to each other, tenderhearted, forgiving one another, just as God through Christ has forgiven you.

“Ah, kindness. What a simple way to tell another struggling soul that there is love to be found in the world.” -A. A. Malee

“A single act of kindness throws out roots in all directions, and the roots spring up and make new trees.” -Amelia Earhart

Loving-kindness, compassion, sympathetic joy and equanimity are rigorous meditation practices, used for the most part to cultivate one-pointed concentrated attention, out of which the powers of these evoked qualities emerge, transfiguring the heart. Just naming these qualities of heart explicitly and making their role explicit in our practice may help us to recognize them when they arise spontaneously during mindfulness practice. As well as to incline the heart and mind in that direction more frequently, especially in difficult times.

“Each smallest act of kindness, reverberates across great distances and spans of time - affecting lives unknown to the one whose generous spirit, was the source of this good echo. Because kindness is passed on and grows each time it’s passed until a simple courtesy becomes an act of selfless courage, years later, and far away. Likewise, each small meanness, each expression of hatred, each act of evil.” -Dean Koontz

Video has emerged showing a man -- identified as Jim Finch -- setting up a grill in the middle of Mayfield, Kentucky, to prepare food for locals who have been impacted by the tornado that ravaged the town on Friday.

"I just figured I'd do what I can do -- show up with some food and some water," Finch is heard saying on video as debris and rubble can be seen in the background.

Do you know who's going through a lot right now?

Do you know who's going through a lot right now?

No one is useless in this world who lightens the burden of another. ~Chas. Dickens