marke said:
Democrats find fault with every republican on the ticket
Click to expand...

User Name said:
MAGA Trumplican Laura Loomer lost her nomination to her Republican opponent. In true Trumplican fashion, she is refusing to concede, is claiming election fraud, and is even calling on her fellow Trumplicans to boycott the election in November since she won't be on the ballot:

Every accusation is a confession by projection.

I always know I'm on to something when you start spamming a thread with blather. In this case, you're hoping to drown out my post about Trump advisor Steve Bannon vs. Trump advisor (and son-in-law) Jared Kushner:

User Name said:
On Thursday's episode of journalist Bari Weiss' podcast Honestly, Barr described Trump as someone who is "all about himself" and willing to pursue his personal agenda at the expense of the greater GOP.

Barr, who headed the Department of Justice for two years under Trump, criticized him for castigating members of their party as "RINOs," or Republicans in name only, contending that not only do such conservatives not exist but that Trump has chosen to do so to purge the GOP of people he didn't like.

"The idea that there are RINOs, people that really don't support Republican principles, is simply not true," Barr said. "What the president is defining as RINOs are people who are true blue Republicans and conservatives but who just have a problem with Trump personally."

Like Trump, Barr has opinions and expresses them, but he is not always right. Consider his coverup of the botched Ruby Ridge fiasco. J. Edgar Hoover presided over the willful framing of 4 innocent men for a murder that he knew an FBI informant had committed, and 3 of the men were sentenced to death. Two decades later Robert Mueller fought for years to keep two of the surviving men locked up in spite of the fact he also knew they were innocent. William Barr supervised the botched Ruby Ridge raid, afterward denied he was involved, and then spent months fighting to keep the FBI agent who murdered Randy Weaver's wife from having to answer for his crime in the case.

Barr has done a lot of good, but he was not and is not a good man.
M

Republicans who shamelessly and stupidly add their endorsement to uncontrolled spending are just as stupid and incompetent as democrats who promote such damaging foolishness.
M

Does he oppose abortion, homosexuality, communism, and leftist policies? Or does he have better sense than that?

ok doser said:
I would rather see DeSantis in the White House than Trump.
Click to expand...

In Tallahassee they love the governor (boo-hoo-hoo)
Now we all did what we could do
Now January 6th does not bother me
Does your conscience bother you?
Tell the truth
Sung to tune of "Sweet Home Alabama"​

7thMoon said:
I think you need to buy a clue.
Click to expand...

You need to buy some clues from me. I'm selling them wholesale.


7thMoon said:
Pence is a backstabber and hasn't passed any pro-life legislation of any consequence when he was governor of Indiana.
Click to expand...

I think you'll enjoy these threads:

Is Mike Pence a TRAITOR?

https://apnews.com/article/mike-pence-electoral-vote-d27490021b4203087043df1939b82f8b Mike Pence, while he was Vice President, could have rejected states' electoral votes to force another election--according to then president Donald Trump. But Pence refused to do that. Instead, he chose to...
theologyonline.com

Who is the "Deep State / Swamp"? Name names!

Trump came into the presidency claiming that he was going to "drain the swamp" in DC. He also complained bitterly about "the Deep State." Presumably, those two things are the same. One thing Trump rarely did, however, was name names. That's what this thread is for. Who are the swamp monsters...
theologyonline.com

7thMoon said:
Since you don't know what the CFR is, this thread is useless like yourself.
Click to expand...

Of course I know what the Council on Foreign Relations is. Lots of Republicans in that. But feel free to go ahead and enlighten us. Start a thread on it.

7thMoon said:
Lame, even Rand Paul knew Mike Pence only had the power to certify.
Click to expand...

Trump did not know that Mike Pence only had the power to certify.

7thMoon said:
It is part of the Deep State which you defend.
Click to expand...

There sure are lots of Republicans in that Deep State by the way.

User Name said:
In the battle between trollish Trump advisor Steve Bannon vs. Trump advisor (and son-in-law) Jared Kushner, who will win?

Jared fires back at Steve Bannon:

Former Senior White House adviser Jared Kushner has said that Steve Bannon's "head got so big" that former President Donald Trump had to fire him from his administration.

Kushner, the former president's son-in-law, spoke to The Hugh Hewitt Show about the administration and described Bannon's time as Trump's chief strategist, saying he'd been "knife-fighting with colleagues."

Bannon, former head of Breitbart News, was fired in August, 2017 just months after Trump assumed office in January that year. 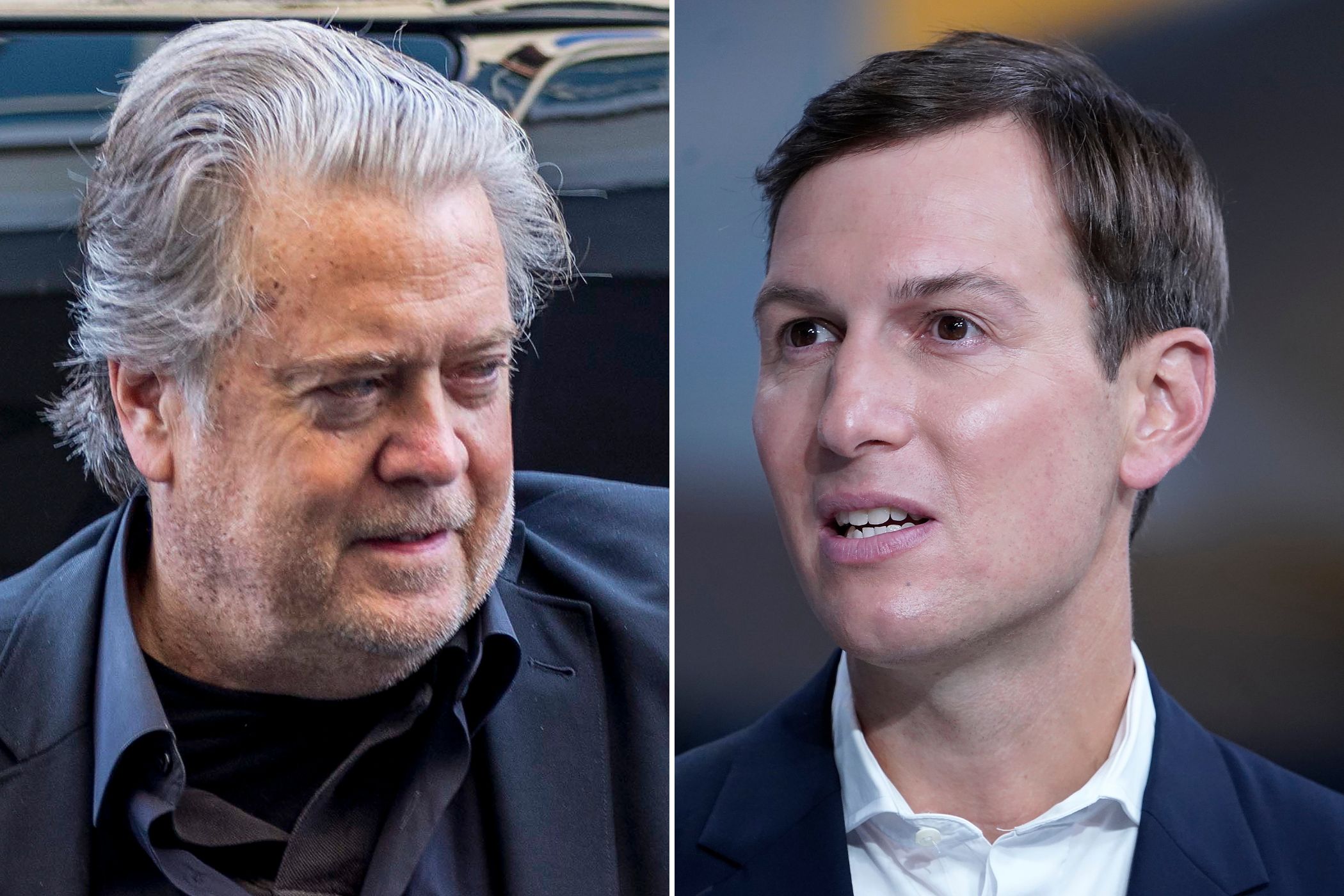 Donald Trump's son-in-law described Bannon as "knife-fighting with colleagues" during his time at the White House.

"Arizona GOP Senate nominee Blake Masters quietly updated his website after his primary win to remove the baseless claim that the 2020 presidential election was stolen from Donald Trump, CNN reports. An analysis of Masters’ site also shows the he scrubbed a section claiming the U.S. would be better off if Trump had remained in the White House, as well as dropping a passage claiming Democrats were trying to 'import' a new electorate."

User Name said:
There sure are lots of Republicans in that Deep State by the way.
Click to expand...

Yeah, we know. Do you actually think that's a good thing?

Jefferson said:
Yeah, we know. Do you actually think that's a good thing?
Click to expand...

I don't think having lots of Republicans in anything is a good thing.

User Name said:
I don't think having lots of Republicans in anything is a good thing.
Click to expand...

What are your Biblical reasons for being so pro-Democrat?

Jefferson said:
What are your Biblical reasons for being so pro-Democrat?
Click to expand...

I have no biblical reasons for being a political partisan of any sort.

He's right about this:

User Name said:
I have no biblical reasons for being a political partisan of any sort.
Click to expand...

Do you have biblical reasons for anything you believe or do?

Jefferson said:
Do you have biblical reasons for anything you believe or do?
Click to expand...