“I sat for a long time in silence. I didn’t get any more feelings that God was saying anything. Maybe He’d said all He had to say. If that was true, then I reckoned it was time I did what He’d told me to do—ask Him. God had had His say. Now it was my turn. I don’t suppose God keeps talking to someone who’s not paying attention to what He says. If you want Him to keep talking to you, I guess you’ve got to keep your half of the conversation going, and right now I figured that my half of the conversation was to do what He’d told me.” ~ Michael R. Phillips
Last edited: Aug 26, 2021
F 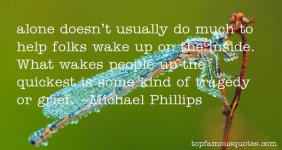 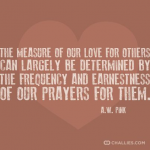 "Prayer assumes the sovereignty of God. If God is not sovereign, we have no assurance that He is able to answer our prayers. Our prayers would become nothing more than wishes. But while God's sovereignty, along with his wisdom and love, is the foundation of our trust in Him, prayer is the expression of that trust." ~Jerry Bridges
F

“Sin is cosmic treason. Sin is treason against a perfectly pure Sovereign. It is an act of supreme ingratitude toward the One to whom we owe everything, to the One who has given us life itself. Have you ever considered the deeper implications of the slightest sin, of the most minute peccadillo? What are we saying to our Creator when we disobey Him at the slightest point? We are saying no to the righteousness of God. We are saying, 'God, Your law is not good. My judgement is better than Yours. Your authority does not apply to me. I am above and beyond Your jurisdiction. I have the right to do what I want to do, not what You command me to do.” ~R.C. Sproul
F 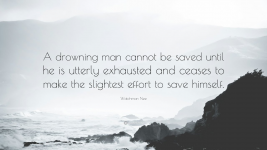 Quote: "A drowning man cannot be saved until he is utterly exhausted and ceases to make the slightest effort to save himself."

There's probably something to that. But why do we ever let it get that far before we change? When that change is all upside, and no downside?

I think the wrong but popular reason is to say that we are lazy or stupid or slow. But it's rather myopia, whether imposed upon us, or determined myopia on our part.

You have to, at some point, choose not averting our eyes. Look at it. Look at the forest, and at the trees. Every single one of them!

The Christian life is ethically superior to all other lifestyle choices

The Christian life is valuable. It's silly how clearly superior that it is to every other lifestyle choice. When the drowning man stops trying to not drown, then he finally looks at the Jesus tree. And of course He is the obvious solution all along.

Up to recently Protestant confessions of faith were even with Catholicism

The values that we pursue sustains either prosperity or failure, if we pursue good values, then this pursuit sustains prosperity, it is unstable failing and 'wants' to prosper. The pursuit of bad values sustains failure.

Other 'theories of Jesus' invalid

Dispensationalism, and Calvinism, and other Protestant theories do not sustain the Christian life. They are not durable theories of Jesus. They are unreliable and fail frequently. The proof of the pudding is in the tasting, and the proof is in the pudding, and the proof and the taste is about whether families transmit the Christian life from generation to generation.

While there are strongly objecting exceptions the trend among Protestant churches is to raise the rainbow flag, which denies that chastity is a Christian value. Whatever theory sustains this idea, is clearly an invalid theory of Jesus, and this theory cannot infiltrate Catholicism.

When that failure becomes violent crime

Catholicism superior to the other Jesus theories even on their terms

Using the methods that Dispensationalism and Calvinism use, the analysis and summary of Scripture, to produce their theories of Jesus, Catholicism is clearly the only indomitable position on Jesus, and there isn't a close second ---- it's a 'blow out'.

Nobody with no other theory can knock Catholicism off the mountain. If you believe in Jesus in any way, then you also believe Catholicism, and not Orthodoxy, not Calvinism and not Dispensationalism.

And if you don't, then you're suffering from myopia, whether it is being imposed upon you, or you are just determinedly myopic.

If it's being imposed upon you, then we know from Scripture who is doing that.

“When we understand the character of God, when we grasp something of His holiness, then we begin to understand the radical character of our sin and hopelessness. Helpless sinners can survive only by grace. Our strength is futile in itself; we are spiritually impotent without the assistance of a merciful God. The hands of God are gracious hands. They alone have the power to rescue us from certain destruction.” ~R.C. Sproul

“When you crash into the living God, the encounter is certain to renovate every square inch of your life’s boat.” ~ Eric Ludy

FineLinen said:
“When you crash into the living God, the encounter is certain to renovate every square inch of your life’s boat.” ~ Eric Ludy
Click to expand... 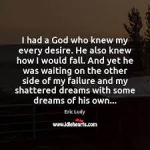 If ever FineLinen does something inconsistent with being a Calvinist bot, I'll try and let you know
F

“If you had slept in the same house or field with Jesus, awakened with him, eaten with him and helped him, what would you have observed? One thing we always think of is that Jesus gave himself almost entirely to what we would consider interruptions. Most of the teaching, healing and wonders we see in his life were responsive...seemingly unplanned. He trusted that what the Father allowed to cross his path was exactly that...from the Father. Jesus always seemed willing for things to get messy” ~ Marcia Lebhar

“On the front end it (Sabbath) hurts. Leaving my to-do lists alone. Trusting the universe will continue its forward motion without my intervention. Demonstrating that it is God who sustains me and not my own efforts. Sabbath is like the scary free fall of faith, in microcosm. And it is good for our hearts to practice. It gets easier.”
F 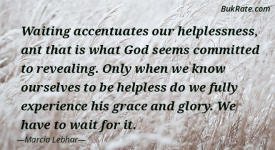 Idolater said:
If ever FineLinen does something inconsistent with being a Calvinist bot, I'll try and let you know
Click to expand...

"God is my Father. He loves me, I shall never think of anything He will forget. Why should I worry?" ~Oswald Chambers