“Based on what we know now, including the recent department of justice indictments, do you agree that there is now clear evidence that supports the conclusion that the January 6th insurrection was planned and it was a coordinated attack on the U.S. Capitol?”

“Would you agree that this attack involved white supremacists and extremist groups?”

“Would you agree that this was a highly dangerous situation which was horrific, but could have actually been worse without the courage of the officers that you commanded?”

All four officials agreed to each question.

A Donald Trump fan caught on camera brawling with police officers during the Jan. 6 attack on the U.S. Capitol was charged by the feds this week after he bragged about his conduct on a Trump fan site and pushed back on the online conspiracy theory that undercover “antifa” members were behind the violence.

Jose Padilla faces several charges, including felony counts of obstruction of law enforcement during a civil disorder and assault on a law enforcement officer with a deadly or dangerous weapon. Federal officials say he pushed up against the police line while wearing a scuba mask and shoved officers trying to stop the pro-Trump mob from storming the Capitol. He also helped rioters use a giant metal-framed Trump sign as a battering ram against officers on the police line, and threw a flagpole at officers trying to keep the mob out of the building.

The feds said Padilla used the website TheDonald.win, which was created after the subreddit r/The_Donald was placed on restricted mode last year. He also posted about his support for Trump on Facebook.

“There’s a lot of memes and posts flying around saying that the people who were fighting last night were all Antifa provacateurs etc. I just want to say that as a first hand observer of every point of last night, that it was not Antifa. They were Patriots who were trying to Restore the Republic after being attacked by the cops, who struck first,” Padilla wrote on Facebook, according to the feds. “Even those who broke the windows next to the doorway to the Capitol were Patriots trying to find a way to turn the Flanks of the cops.”

On the online forum TheDonald.win, Padilla wrote about his involvement in the attack, saying that he “pushed the rails,” “pushed the stairs,” and “pushed the doorway.”

“I was beaten unconscious twice, sprayed more times than I care to count, received strikes from batons that should have been lethal (Multiple temple and carotid strikes) except that God was on my side,” Padilla wrote, the feds say.

Padilla also worked to correct the record about online rumors that “Antifa” was somehow responsible for the pro-Trump mob’s efforts.

“Honestly, the guy breaking the windows weren’t Antifa,” he wrote. “They were Patriots trying to find a new way in so we could flank the cops who were holding the doorway.”
Last edited: Tuesday at 6:34 PM

A retired NYPD officer who had been assigned for a time to work perimeter security at City Hall and at Gracie Mansion, the mayor's official residence, has been accused of using a pipe to attack a U.S. Capitol officer during the Jan. 6 siege, law enforcement officials with knowledge of the case told News 4 Tuesday.

Thomas Webster surrendered to the FBI's Hudson Valley office Monday to face charges in the ongoing investigation. A day later in White Plains federal court, prosecutors said the former U.S. Marine attacked a Capitol police officer with an aluminum pole while holding a Marine Corps flag. Webster then allegedly ripped off a mask and caused the officer to choke, proseuctors said.

Webster was seen in body camera footage carrying a large metal flagpole with a red U.S. Marines flag attached to it, according to a criminal complaint. It alleges that Webster berated a Capitol police officer with a curse-laden diatribe, as he "aggressively" shoved a metal barricade into the officer and armed himself with the metal rod.

The alleged rioter then brings the flagpole above his head and swings it downward, striking the metal barrier right in front of the officer, the complaint reads. Webster then attempted to attack the officer by lunging toward him with the flagpole, striking the cop several times, according to the criminal complaint.

The cop is eventually able to wrestle the pole away from Webster, and begins retreating further behind the barricades. But that doesn't stop the attack, the papers allege, as Webster breaks through the barriers and charges right at the officer with "clenched fists." He lunges again at the law enforcement officer and tackles him to the ground, where Webster allegedly attacks him for 10 seconds, the complaint reads.

Different angles on social media allegedly show Webster pinning the officer to the ground and straddling him while he tries to forcefully remove the face shield and gas mask. The officer later said that the helmet stayed on due to the chin strap, which began to choke him during part of the alleged assault, according to the criminal complaint.

Webster is later seen in a video that was posted to YouTube on a staircase leading to the Capitol building, the complaint says, saying into the camera "Send more patriots. We need some help."

So you made a thread for the "false flag" video (you've been sucked down into the youtube vortex just like patrick jane), and predictably my post in reply of the MAGAdude's insistence the insurrection was the work of 'patriots' and not antifa was deleted.

Well, here's another refutation of your stupid false flag:

Close ally of Marjorie Taylor Greene among those in Capitol mob​

​
Anthony Aguero, a conservative livestreamer, activist and associate of Greene, said on video following the January 6 assault on the Capitol that he had been among those who entered and attacked those who falsely claimed it was done by "Antifa."​
​
"We were all there. It was not Antifa and it was not BLM. It was Trump supporters that did that yesterday. I'm the first to admit it, being one myself," said Aguero in a video posted on January 7. ​
​
"I walked amongst all those people," he added, later defending entering the Capitol.​
​
Greene and Aguero have worked closely together over the years on causes such as immigration and the border wall and have attended pro-Trump rallies together. In many since-deleted videos saved by CNN's KFile, Greene repeatedly calls Aguero "amazing" and a "friend." On social media, Aguero has called Greene "one of my closest friends."​
​
Those MAGA are proud of their insurrection, and you're trying to take it away from them and they don't like that. It would be funny if it wasn't so seditious. 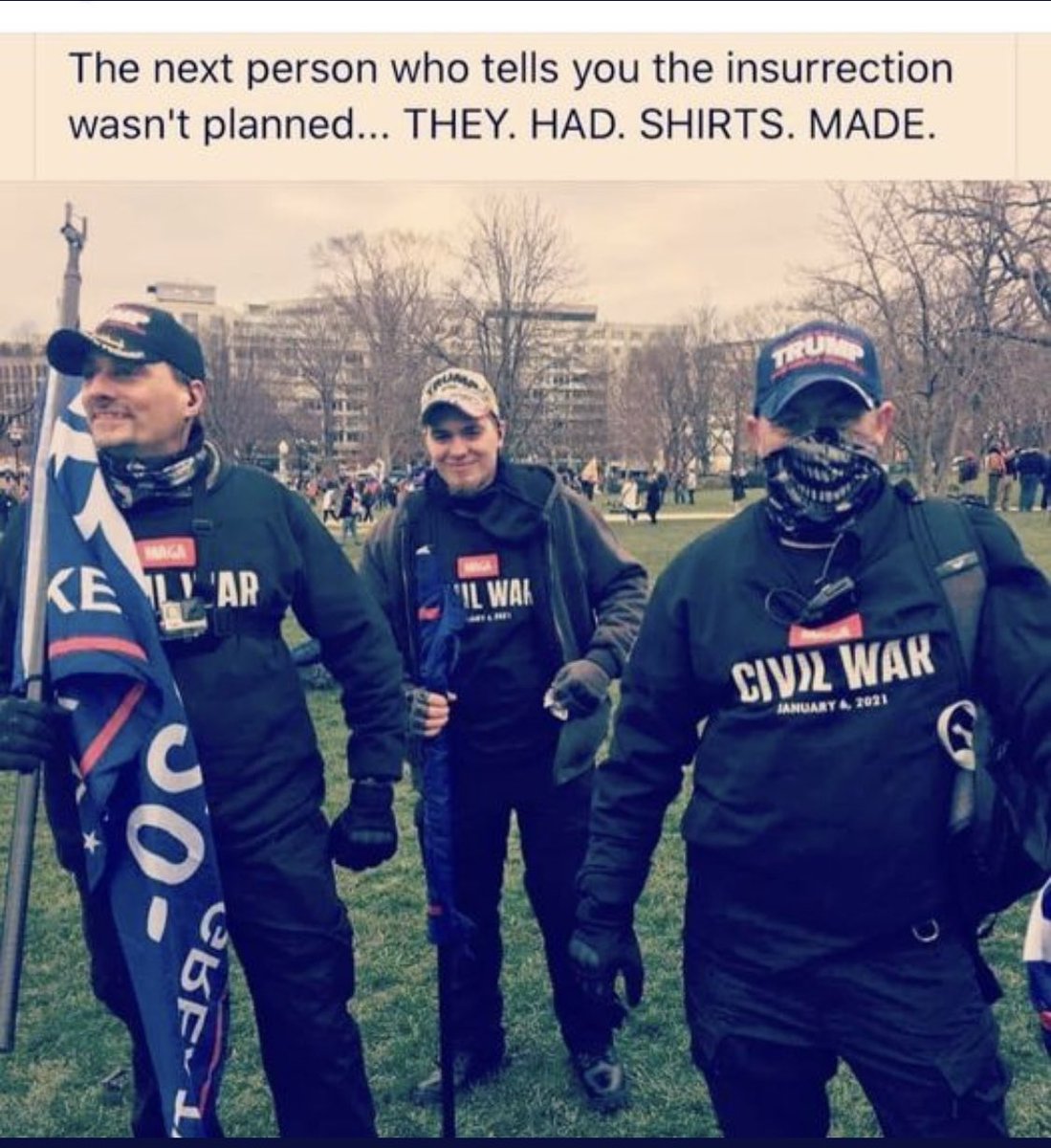 Seditionist Texted 'Moron!' To Ex-Girlfriend; She Turned Him In​

“If you can’t see the election was stolen you’re a moron,” texted MAGA rioter Richard Michetti. His ex turned him in to the FBI the next day.

A pickup truck bearing a Three Percenter militia sticker that was parked outside the U.S. Capitol on Jan. 6 has been traced to the husband of a Hitler-quoting Republican lawmaker.

Rep. Mary Miller (R-IL) gained infamy two days after she was sworn in -- and one day before the deadly riot -- by saying Adolf Hitler "was right on one thing," and the militia-endorsing pickup was linked to her husband by the @capitolhunters Twitter account that's crowd-sourcing efforts to identify participants in the insurrection, reported The Daily Beast.

"Army friend gave me decal. Thought it was a cool decal. Took it off because of negative pub," said Chris Miller, the congresswoman's husband and himself a member of the Illinois House of Representatives, in an email statement to The Beast.


https://twitter.com/i/web/status/1364795959474028545
Chris Miller insists he was never a member of the loosely organized anti-government militia, and claims he "didn't know anything about 3% till fake news started this fake story and read about them."

The state lawmaker's pickup was photographed outside the Capitol, which is inaccessible to regular vehicle traffic, raised questions about who it belonged to and how it got there.

Third MAGA quoted in this thread to say "There were no anarchists no antifa just patriots trying to take back our country." 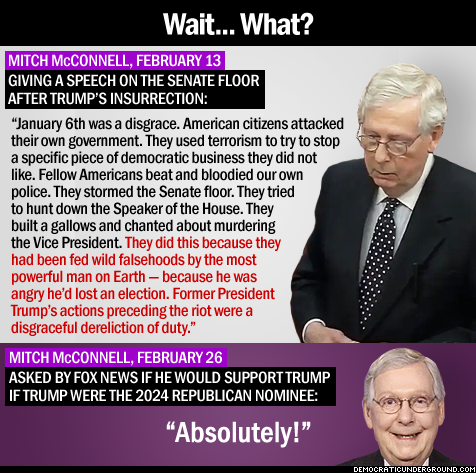 Mitch "the swamp creature" McConnell, caught in a hypocrisy?

But it always is. Mitch has never found a lobbyist he didn't like.

Seditionist Texted 'Moron!' To Ex-Girlfriend; She Turned Him In​

“If you can’t see the election was stolen you’re a moron,” texted MAGA rioter Richard Michetti. His ex turned him in to the FBI the next day.