Winston Churchill famously said, “Those who fail to learn from history are condemned to repeat it.” All Americans, but especially my fellow Republicans, should remember this wisdom during the Senate’s trial of former president Donald Trump.

I say this as a lifelong Republican who voted to impeach Trump last month. Virtually all my colleagues on the right side of the aisle took the opposite path. Most felt it was a waste of time — political theater that distracted from bigger issues. The overwhelming majority of Senate Republicans appear to feel the same way about conviction.

But this isn’t a waste of time. It’s a matter of accountability. If the GOP doesn’t take a stand, the chaos of the past few months, and the past four years, could quickly return. The future of our party and our country depends on confronting what happened — so it doesn’t happen again.

The immediate cause for Trump’s impeachment was Jan. 6. But the president’s rally and resulting riot on Capitol Hill didn’t come out of nowhere.

They were the result of four-plus years of anger, outrage and outright lies. Perhaps the most dangerous lie — or at least the most recent — was that the election was stolen. Of course it wasn’t, but a huge number of Republican leaders encouraged the belief that it was. Every time that lie was repeated, the riots of Jan. 6 became more likely.

Even now, many Republicans refuse to admit what happened. They continue to feed anger and resentment among the people. On Jan. 6, that fury led to the murder of a Capitol Police officer and the deaths of four other Americans. If that rage is still building, where does it go from here?
Impeachment offers a chance to say enough is enough. It ought to force every American, regardless of party affiliation, to remember not only what happened on Jan. 6, but also the path that led there. After all, the situation could get much, much worse — with more violence and more division that cannot be overcome. The further down this road we go, the closer we come to the end of America as we know it.

The Republican Party I joined as a young man would never take that road. The GOP that inspired me to serve in uniform and then run for public office believed a brighter future was just around the bend. We stood for equal opportunity, firm in our conviction that a poor kid from the South Side of Chicago deserves the same shot as a privileged kid from Highland Park. We knew that if we brought everyone into America’s promise, we would unleash a new era of American progress and prosperity. Outrage and the fear of a darker future were nowhere to be found in that Republican Party.

When leaders such as Donald Trump changed that dynamic, many of my fellow Republicans went along without question. Many are still there because they believe the rank-and-file Republican voter is there, too. But I think that’s an illusion. The anger and outrage are drowning out the much larger group of people who reject that approach. Worse, many have gone silent because they assume the party’s leaders no longer represent them. They’re waiting for leaders who will say what they know is true.

Since my vote to impeach Trump, I’ve heard from tens of thousands of my constituents. Their reaction has been overwhelmingly supportive. Republicans of all backgrounds and outlooks have told me they appreciate my efforts to return the GOP to a foundation of principle, not personality. I’ve even heard from many Democrats. They don’t agree with me on a lot of issues, but they want the Republican Party to be healthy and competitive.

I firmly believe the majority of Americans — Republican, Democrat, independent, you name it — reject the madness of the past four years. But we’ll never move forward by ignoring what happened or refusing to hold accountable those responsible. That will embolden the few who led us here and dishearten the many who know America is better than this. It will make it more likely that we see more anger, violence and chaos in the years ahead.

The better path is to learn the lessons of the recent past. Convicting Donald Trump is necessary to save America from going further down a sad, dangerous road.

Temp Banned
I just watched the video timeline presented by the House managers during the impeachment trial.

It had footage I've not seen before, interspersed with Trump's incitement at the rally, like the MAGA saying they needed 30K guns and someone replying "next time." Footage of MAGAs bashing a window with an America flag. Going down the halls kicking in doors screaming "where are they?" Saying they were there for Trump. These animals were there for Trump, because Trump sent them there.

Temp Banned
Such an eloquent speech by Raskin, one of his most haunting memories is seeing a Capitol police officer being being mercilessly beaten by a rioter with a flagpole still bearing the American flag. If I can get a transcript I'll post it here.

Then there's really nothing to stop Pelosi from continuing to impeach him, is there?

Good! This means Clinton and Obama can be impeached also!

Jefferson said:
Good! This means Clinton and Obama can be impeached also!
Click to expand...

I want to see FDR impeached! 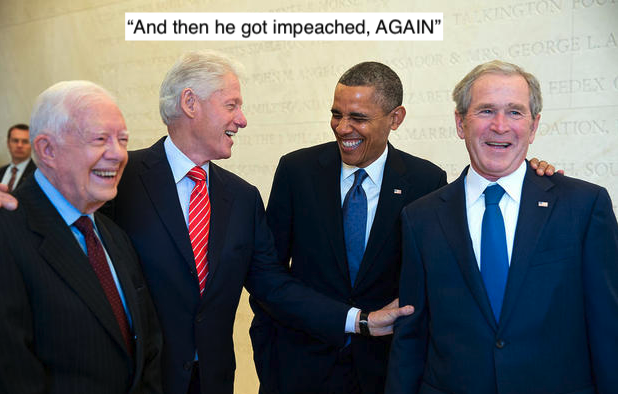 Temp Banned
Trump had already been informed they were moving Pence to a secure location, so Trump knew Pence was in physical danger when he tweeted.

Six US Capitol Police officers have been suspended with pay, and 29 others have been placed under investigation...

One of the suspended officers took a selfie with someone who was part of the mob that overtook the Capitol, according to Rep. Tim Ryan, a Democrat from Ohio. Another wore a "Make America Great Again" hat and started directing people around the building...
O

annabenedetti said:
Trump had already been informed they were moving Pence to a secure location, so Trump knew Pence was in physical danger when he tweeted.

Oh yes, Chris Murphy who has connections to Chinese spies.

Someone doesn't understand the constitution.