Hall of Fame
A few years back I started a thread comparing reports of other posters to a horse race. It began after chrysostom asked me about reports some time before that. His inquiry had me looking over the sum of that stuff and realizing how often I'd done it and the consideration altered my habit. So I went from one of the most active reporters to one of the least.

I used the new thread to both remain mindful and to, hopefully, nudge others who might have been at it more than they realized and counter-productively.

Anyway, it ran for several years before I left off last. It was oddly popular, but so many of the regulars are absent these days it may not resonate anymore. If not, I'll keep it going for the initial reason I started it and let it go at that.

Typically I'd start with the first leg/week into the turn, out and on the backstretch in week two, into and out of the turn in week three and the home stretch of week four. As the inaugural month is nearly over I'll have to sum January's race.

Below I'll post the winners for each month of the year and the yearly winner when 2017 is in the books. Post two will catch this months race as it approaches the wire.

January: In a surprisingly sparse field, Sod (doser) takes the month, out in front early and holding on against faint challenges late. Congrats Doser.

February: It was a race for second and place as a thinly contested race sees Doser ride the winning nag home.

March: is in the books for Doser.

April: A surprising come from behind in the home stretch and April belongs to Truster! :first:
Click to expand...

May: The month belongs to Musterion, who holds off all challengers to win by two lengths! :first:
Click to expand...

June: anna ran hard and fast and all the way home. Congrats! :first:
Click to expand...

July: Must took an early lead and never let up. Congrats to Musterion,​ bringing it home again. :first:
Click to expand...

August: Musterion takes back to back derbies with a solid win over the field and throws his hat in the ring for end of the year honors. :first:
Click to expand...

September: PJ took a largely listless field, but not without a challenge from glory. Congrats PJ! :first:
Click to expand...

November: belongs to musterion and his determined nag. :first:
Click to expand...

December: Tam takes the field at the wire! :first:
Click to expand...

The Derby Whinner: taking the trophy with a 4 to 1 edge over the competition, Musterion closes the year as the Cub Reporter Nag Extraordinaire!

Heading for the wire it's ok doser holding a blistering pace (23) easily out distancing Tam, some six lengths trailing (17) with little hope of shortening doser's lead. Angel and GM (8) are neck and neck at third in a heated race but too far out to challenge Tam for second. Nang, yours truly, and must are four back (4) with an outside shot at challenging for third. The rest of the field is walking about, nibbling grass or napping...

Heading for the wire it's ok doser ...
Click to expand...

Hall of Fame
You know, this may be the only race where the winner is ultimately put down for his efforts. :think:

Town Heretic said:
You know, this may be the only race where the winner is ultimately put down for his efforts. :think:
Click to expand...

Winner? You mean Whiner don't you?

Hall of Fame
You do know most reports anymore are for spammers and trolls?

Hall of Fame
This is a good thread. Thanks for starting it again. :carryon:

Angel4Truth said:
You do know most reports anymore are for spammers and trolls?
Click to expand...

You know, I think I'm going to start noting the spam part, because it's true for more than a few of us. I think all of my reports were spam related in January. I know you did a good bit of that and Tam did as well.

It's worth noting and I'll be sure and do that in the future. :thumb:

Hall of Fame
Yes. You have to read them because spam reporting does not count. Only reporting real members counts,

Ktoyou said:
Yes. You have to read them because spam reporting does not count. Only reporting real members counts,
Click to expand...

It's been so little of a problem in the past it wasn't worth it, but there is a great deal more going on since the change in environs. I may take your counsel on that. I do look at every report, so it wouldn't entail much difference in effort and I have noticed the frequency of spam reporting.

I think the adjustment will still leave doser in the lead with about 8 posts unrelated, and take Tam completely out of the running...give me a few and I'll adjust the totals in the second post. :thumb:

Hall of Fame
Sometimes I report spam to help out a little when here. I do like the thread :up:

Hall of Fame
Taking effective counsel from Angel and Ktoyou, the adjusted race report as they near the tape.

ok doser is in the lead (11) with GM some five lengths back (6) and time running out to close. Musterion and Angel are still in the hunt, running neck and neck in the three spot (5) a scant length off second. Two lengths back, Nang and AMR are in a position to make trouble for the three with a scraggly pack not far off their pace.

And at the wire it's doser by a good four lengths (11) with GM (7) holding on to second place against a late challenge by Angel (6) that falls just short, but pulls her out of a tie for third place with Musterion (5), who fades down the home stretch. Nang and AMR (3) lead the rest of the pack home.


town said:
And at the wire it's doser by a good four lengths ...
Click to expand... 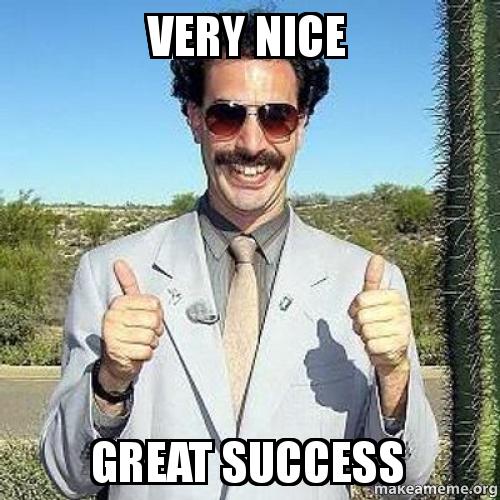 A---n--d they're off and down the front stretch where early on it's a one nag race, ok doser in the lead by a full five lengths (7). Angel and must (2) are battling listlessly to challenge, neck and neck, while a handful of remaining horses begin the long walk from the gate as the front runners eye the turn!

An actor who thinks We should give trump a chance.

I see it's a multi screen GIF. I was referring to Matthew Mc Conaughey.

ClimateSanity said:
An actor who thinks We should give trump a chance.

I see it's a multi screen GIF. I was referring to Matthew Mc Conaughey.
Click to expand...

A---n--d they're off and down the front stretch where early on it's a one nag race, ok doser in the lead by a full five lengths (7). Angel and must (2) are battling listlessly to challenge, neck and neck, while a handful of remaining horses begin the long walk from the gate as the front runners eye the turn!
Click to expand...