Do you see a pattern?
Q
Click to expand...

Seriously, "Q" wants to go into the knitting and crochet market...

Flat out bonkers yet again.

Hey, those new clothes that that emperor guy is wearing, don't they look great?!

Hmm, is this the same "elite box" that the whole Q-anon thing touts as Trump being in a "secret battle" with? The elite cabal of Satan worshipping paedophiles?

Ya know, who can blame Trump for laughing at the likes of far right evangelicals who push this lunacy and oh so gladly lap it up? He's a clown alright, but wow, his fans not only take the cake but most of the custard pies as well...

He's a former QAnon believer. He doesn't want to tell his story, but thinks it might help.
Travis M. Andrews, The Washington Post

Jitarth Jadeja was already deep into conspiracy theories when he first heard of Q.

One day in December 2017, he tuned into Infowars, the media outlet run by the conspiracy theorist Alex Jones. Two guests on the radio show were talking about the "calm before the storm," a reference to an absurd theory that President Donald Trump will soon wage a secret war against a cabal of Satan-worshiping pedophiles and a slew of other evildoers. It's one of the many tall tales believed by followers of the movement called QAnon, ranging from the false claim that the government created vaccines to track citizens to the ridiculous idea that Hillary Clinton and Katy Perry drink the blood of young children to gain eternal youth.

"It was pretty generic conspiracy theory stuff at the time, but because Alex had them on his show, it gave them an air of legitimacy with alternative media," said the 32-year-old Sydney resident in a phone call late last month. He was hooked. For the next 2½ years, he closely followed the movement, spending hours each day devouring as much Q-related content as he could find.

This isn't a story Jadeja necessarily wants to tell. Not really. He's moved on, recently founding a data analytics venture. He can look back at it with some humor. When asked if he had a partner, for example, he replied, he "didn't have a significant other during QAnon, surprise surprise, and if I did I doubt I would've held on to them very long."

Still, "it's kind of embarrassing." But, he reasons, if telling it prevents anyone else from falling down the same dark and twisted rabbit hole he did, then the potential humiliation is worth it.

QAnon can be traced back to 2017 posts on the online message board 4chan by someone named "Q," who claimed to be a government insider with Q security clearance, the highest level in the U.S. Energy Department. The idea is simple: Q supposedly learns of classified information, then leaks it online.

Jadeja would anxiously await each new "Q drop" - they felt "energizing," he said. "The world didn't seem like a dark place. It seemed like a simple place. It felt like everyone else was living in a dream world, and I wasn't. Even though it was the other way around."

For many followers, the way into QAnon is the belief that pop stars and high-ranking members of the Democratic Party run a secret pedophile ring, a conspiracy theory that existed before Q's first post but was later folded into the "movement." That belief led to real-world fallout in 2016 when Edgar Welch burst into the D.C. pizzeria Comet Ping Pong with an assault-style rifle in hopes of rescuing children who were never there in the first place.

But, as Jadeja said, that theory is "like the skin on the body of QAnon. It's a taut, tiny, small layer. But no one who believes in Q just believes in that."

"Every single conspiracy theory you've ever heard - including some you've never heard - are somehow part of the Q movement," he added, citing the beliefs that the Earth is flat and that some celebrities are actual shape-shifting reptilian aliens from space. They fit into the "grand unified theory of" Q.

The whole thing, as these followers believe, will come to a head when martial law is declared in the United States and all of the pedophiles, baby eaters and lizard people are captured or killed. While that may sound ridiculous, that comfort with violence is exactly what scares Jadeja.

"Really, it's like an existential battle between good and evil. That's how it's framed," he said. "Everyone is very OK with the concept of martial law. And I was part of this. I was so far in it. If Hillary Clinton had been executed publicly, I would have cheered. That bothers me to this day."

Reflecting on this disturbing desire, Jadeja sounds shocked and ashamed: "That's so antithetical to what I usually believe in. I don't even like the death penalty. But these thoughts don't occur to you when you're in the middle of this."

They do occur to relatives watching the descent. His sister Joy Jadeja, 31, an attorney in Sydney, said via email, "It's somewhat difficult to articulate how scary it is to see your loved one go down this dangerous path."

Though the two are so close they share a secret handshake, Jadeja didn't mention Q to her - at first. "It crept up slowly and before I knew it, my brother was raving about Trump, Q and he kept telling me everything was fake news," she said. "It only grew from there."

She realized how far her brother had fallen into this "quicksand" one night when their family was making a two-hour drive back from a "lovely" day trip. The entire time, Jadeja "spoke about this Q theory and the lizard people that ruled the world."

At one point, he couldn't talk about anything else, she added. "After a long week I would walk though the front door and the first thing he would say to me was 'Oh, Joy, the world is coming to an end in 5 days,' and I'd be like, 'Well what on Earth do you want me to do? If I'm going to die I'm going to die!' "

Eventually, he realized the things Q would predict weren't actually playing out.

"He's just always wrong," Jadeja said. There was no martial law. Comet Ping Pong doesn't even have a basement.

At one point, a QAnon believer posted online requesting Q to get Trump to say " 'tip top tippy-top shape,' as kind of a shout out." Four months later, when speaking at the 2018 White House Easter Egg Roll, Trump used a version of that phrase.

"For the longest time, I was like 'Dude, that's a very unique phrase,' " Jadeja said. But as he began questioning QAnon, he began looking more deeply - and stumbled upon a two-part YouTube compilation of Trump repeatedly using that wording. "It's just something that Trump says from time to time. . . . That's when my world kind of came crashing down."

He felt crushed, to put mildly.

"If I didn't have family that loved me I probably would have committed suicide," he said. "It was really a terrible feeling to know that you are this stupid and this wrong."

"He was constantly on edge waiting for Q to make some big move or waiting to hear about a planned move. The world was always due for a massive change," Joy said. "Then, thank God, it all came to a massive halt. After this blip in his history, he is super chill. He's calmed down and his feet are firmly back on Earth. It's such a relief. I don't have to worry about him so much anymore. "

Now Jadeja, who found The Washington Post by responding to a callout on Reddit, is trying to find a silver lining in his experience - by offering advice on how to talk to those who might be in the clutches of QAnon.

"Accept what they're saying. Take them seriously, as hard as that is," he said. "Try to focus on their behavior. Forget the whole Q aspect. Just accept that's what they believe for now. . . . Don't even bring up Q. Say, 'Fine, but how does that solve the issue that you've been sitting in front of your computer for the last two weeks and haven't gotten up?' "

That's okay, I didn't post it for you. :chuckle:

Oh anna, don't be so hard on yourself 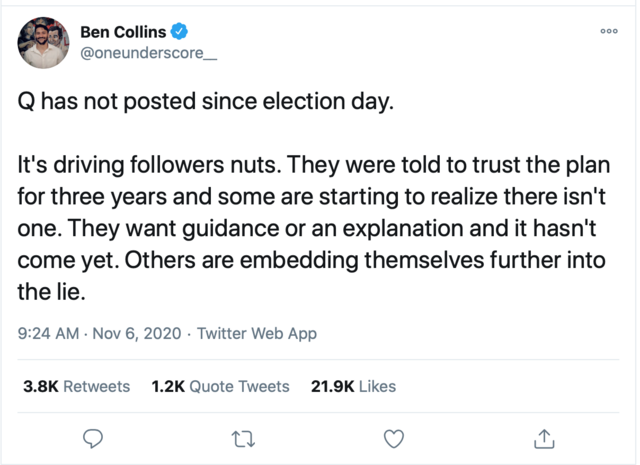 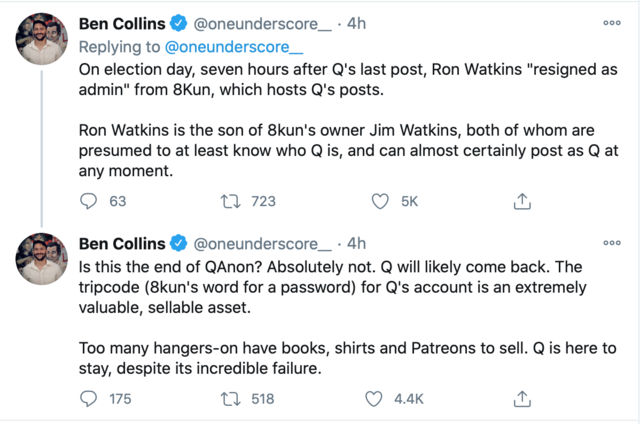 Sad in all senses of the word although mainly the derisory one...

Nothing can stop what is coming.
Nothing!
Q

Who stepped down today [forced]?

More coming?
Why is this relevant?
How do you 'show' the public the truth?
How do you 'safeguard' US elections post-POTUS?
How do you 'remove' foreign interference and corruption and install US-owned voter ID law(s) and other safeguards?
It had to be this way.
Sometimes you must walk through the darkness before you see the light.
Q

Nothing can stop what is coming.
Nothing!
Q
Click to expand...

‘We All Got Played’: QAnon Followers Implode After Big Moment Never Comes​

But I guess delusion springs eternal...

Staff member
Administrator
Super Moderator
Still waiting on the first skeptic on this forum to attempt to refute www.qproofs.com
H

Jefferson said:
Still waiting on the first skeptic on this forum to attempt to refute www.qproofs.com
Click to expand...

Ever heard of Russell's Teapot?

Hilltrot said:
Ever heard of Russell's Teapot?
Click to expand...