Why Homosexuality MUST Be Recriminalized! Part 4

Status
Not open for further replies.

LIFETIME MEMBER
The LGBTQueer movement has made momentous gains since I started this now 4 part thread just over 3 years ago:

The military: Instead of focusing on a strategy to defeat ISIS and Islamic terrorism in general, the Obama administration concentrated on allowing proud and unrepentant homosexuals into the military. With the repeal of DADT, some of these sexually deranged people are holding high ranks (Brigadier General Randy S.Taylor introduced his 'husband' at the Pentagon's 2015 Gay Pride event). If that doesn't scare the holy jihad out of the Muslim barbarians, the Pentagon is heavily weighing in on allowing cross dressing/genital mutilated transsexuals to openly serve in the US armed forces.

The Boy Scouts: Not only has the US military allowed proud and unrepentant homosexuals into their ranks, one of our country's largest youth mentor organizations, the Boy Scouts of America which was founded on biblical doctrine, just over 2 years ago allowed 'gay' (sexually confused) youth into their organization.

Since pedophilia/pederasty was a huge problem in the Boy Scout organization (as it was in the Catholic Church due to liberal policies allowing homosexuals into the priesthood), it made perfectly good sense to ban homosexual adults from mentoring youth, which amongst other things kept innocent young boys safe from sexual predators in venues like overnight campouts. Throwing common sense out the proverbial window, the Boy Scouts of America in July of 2015 put huge smiles on the faces of the 'Man/Boy Love" faction of the LGBTQueer movement and voted to allow adult homosexual leaders into the organization. 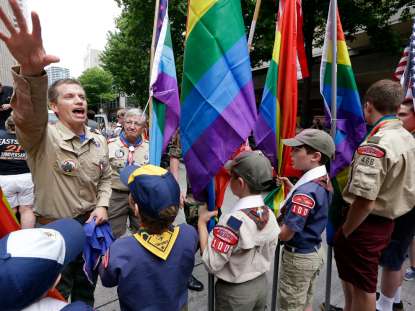 Marriage: With the invaluable institution of marriage limping along due to the decriminalization of adultery, cohabitation laws and the legislation of no-fault divorce decades ago, all of the pawns were in place to mock God's institution of marriage even more by the LGBTQueer movement. The US Supreme Court, following in the footsteps of the 1973 Roe v Wade decision, in late June of 2015 ruled in Obergefell v Hodges amongst other things that "the right to privacy" gave two people of the same sex the constitutional right to marry. In Part 4 I'll review some past subjects that were discussed in Part's 1, 2 and 3 (Link to Part 3 of "Why Homosexuality MUST Be Recriminalized!")
http://www.theologyonline.com/forums/showthread.php?t=101920

I will continue to discuss current topics as they come up, and will go into detail other areas that haven't been covered extensively (Education, pedophilia/pederasty, 'gay' Christianity, African AIDS hoax, Transgender movement, etc.). I'll continue to promote therapy for sexually confused youth and adults alike, using their own testimonies to see that change is possible, as the LGBTQueer movement is doing everything it can do to ban therapy that has helped enormous numbers of men, women and youth leave homosexuality behind.

With yet another important election coming up in 2016, I'll show how people who want to return to a society that embraces decency can get involved in the political process at the grass roots level to help nominate and get God fearing men and women elected to public office (and get their friends and like minded church congregates involved as well).

While I'll continue to post a table of contents every 20+ pages, I'm also adding an extensive index which will allow the readers of this thread to click on direct links to things like disease, disorders and early death: "D"; homosexual "culture": pride parades, film festivals, etc. "C"; causes of homosexual desires: "C", Pedophilia/Pederasty: "P", LGBTQueer bigotry, intolerance, tyranny and terror tactics: "T", and the indoctrination of youth: "Y".

I'll be adding links frequently, so come back to page 1 to check for updates.

While the prognosis for turning things around currently looks grim, remember that it took decades for the sexual anarchist movement to get where they are today, and never forget:

Why are there always rainbow flags at pro-abortion rallies?
https://www.lifesitenews.com/blogs/why-are-there-always-rainbow-flags-at-pro-abortion-rallies

Why Are Liberal ‘Gay’ Activists Freaking Out over a Contraception Case – Hobby Lobby – and Should They Be Worried?
http://americansfortruth.com/2014/0...-case-hobby-lobby-and-should-they-be-worried/

Abortion and Homosexuality Movements Are Linked in their War Against Life and Marriage
http://americansfortruth.com/2009/0...inked-in-their-war-against-life-and-marriage/

How the Supreme Court’s gay ‘marriage’ ruling is tied to abortion and contraception
https://www.lifesitenews.com/news/h...riage-ruling-is-tied-to-abortion-and-contrace

Matt Barber Answers Charge that Christians Focus Too Much on Homosexuality
http://americansfortruth.com/2007/1...ns-focus-too-much-on-homosexuality/#more-1628

After the Ball - How America will conquer its fear and hatred of Gays in the 90s
http://www.massresistance.org/docs/issues/gay_strategies/after_the_ball.html

THE OVERHAULING OF STRAIGHT AMERICA
http://library.gayhomeland.org/0018/EN/EN_Overhauling_Straight.htm

What causes homosexual desire and can it be changed?
http://www.familyresearchinst.org/2009/02/what-causes-homosexual-desire-and-can-it-be-changed/

Sexual Abuse: A Major Cause Of Homosexuality?
http://www.home60515.com/3.html

Does abuse contribute to the development of 'gay'/same-sex attraction?
http://barbwire.com/2015/02/19/abuse-contribute-development-gaysame-sex-attraction/

John Hopkins Psychiatrist: "There is no 'gay' gene"
http://cnsnews.com/blog/michael-w-chapman/johns-hopkins-psychiatrist-there-no-gay-gene

"Gay Pride Week in Boston" reveals what the media doesn't tell you about the homosexual movement
http://www.massresistance.org/docs/gen2/14b/pride-week/about-pride-week/index.html

Studies over a long period of time
http://www.theroadtoemmaus.org/RdLb/22SxSo/PnSx/HSx/hosx_lifspn.htm

MassResistance on how LGBTQueer activists are attempting to pass law banning therapy for sexually confused youth in Massachusetts (July 2015)
http://www.massresistance.org/docs/gen2/15c/Anti-therapy-bill-hearing_072815/coming-up.html

The Bob Spitzer I Knew – Nicolosi on Psychiatrist Whose Research Shows ‘Gays’ Can Change their Orientation
http://americansfortruth.com/2016/0...gays-can-change-their-orientation/#more-23999
Last edited: Apr 28, 2017

Thomas Jefferson, A Bill for Proportioning Crimes and Punishments
http://press-pubs.uchicago.edu/founders/documents/amendVIIIs10.html

Jefferson's Notes on the State of Virginia (Neither picks my pocket nor breaks my leg comment)
http://www.revolutionary-war-and-be...omas-jefferson-1781-1782-2.html#ixzz2eArWRhvE

Independence Day: A message about fear (MassResistance article on the Founding Fathers and the sacrifices that they made)
http://www.massresistance.org/docs/gen2/15c/July-4-message-Fear/index.html

With Malice Aforethought: LGBTQs and the criminal justice system
http://www.windycitymediagroup.com/...Qs-and-the-criminal-justice-system/42712.html

Anderson Cooper to be honored by LGBT community
http://www.usatoday.com/story/life/...oper-to-be-honored-by-lgbt-community/1934291/

Americans For Truth About Homosexuality
http://americansfortruth.com/


"The Little Black Book - Queer in the 21st Century"
http://massresistance.org/docs/issues/black_book/black_book_inside.html

The grooming process of a child sexual predator
http://www.families.com/blog/the-grooming-process-of-a-child-sexual-predator

How pedophiles groom our children and us
http://www.renegadepopo.com/how-pedophiles-groom--printer-version.php

Database of Publically Accused Priests in the United States
http://bishop-accountability.org/priestdb/PriestDBbylastName-A.html

Bestiality OK as long as the animal doesn't mind
http://americansfortruth.com/2008/0...tiality-ok-as-long-as-the-animal-doesnt-mind/

Kameny on the APA
http://ryansorba.blogspot.com/2012/01/homosexuality-and-mental-health.html

Tatchell, Peter: Letter to editor: "Not all sex involving children is abusive, harmful and unwanted."
https://cigpapers.files.wordpress.com/2014/02/picture-9.jpg

What did Jesus say about homosexuality?
http://www.renewamerica.com/columns/popp/140101

Go and Sin No More – Misinterpreting Jesus and the Woman Taken in Adultery
http://theologyonline.com/showthrea...ltery-lesson&p=4573242&viewfull=1#post4573242

300 Examples You Have to Read to Understand the Term ‘Homofascism’
http://barbwire.com/2014/07/07/300-examples-read-understand-meant-term-homofascism/

Stabbing for Sodomy: A Christian man was stabbed simply for disapproving of sodomy
http://www.churchmilitant.com/news/article/stabbing-for-sodomy

Farmers fined for denying 'gay' marriage on their property
https://www.lifesitenews.com/news/court-farmers-cant-refuse-same-sex-wedding-in-backyard

2 Studies That Prove Domestic Violence Is an LGBT Issue
http://www.advocate.com/crime/2014/09/04/2-studies-prove-domestic-violence-lgbt-issue

Potty Talk: The Tyranny of the .03 Percent (Transsexuals)
http://townhall.com/columnists/joyo...y-talk-the-tyranny-of-the-03-percent-n2145407

Women: Decide For Yourselves (violence in restrooms/locker rooms by transsexuals/transvestites)
https://www.youtube.com/watch?v=uzwMJAFWLtQ

When is 90% not Substantially ALL? (violence and lewdness committed by transsexuals/transvestites)
https://outofmypantiesnow.wordpress.com/2013/10/28/when-is-90-not-substantially-all/

Let's not forget the kind of world that people who'd agree with aCW would like to see:

View Poll Results: Should homosexuals be given the death penalty?

annabenedetti said:
Let's not forget the kind of world that people who'd agree with aCW would like to see:

View Poll Results: Should homosexuals be given the death penalty?

That is a bit terrifying.

Do you see any sort of major backlash in the offing? Or will the Christian view go underground, or "into the closet", as it were?

annabenedetti said:
Let's not forget the kind of world that people who'd agree with aCW would like to see:

View Poll Results: Should homosexuals be given the death penalty?
Click to expand...

(annabenedetti gets Part 4 going with a little scare mongering).

You'll note that I put a great emphasis on therapy for sexually confused people, not putting them to death. If you'd paid attention to Part 3 you'd have also noted that Jesus rescinded the death penalty for homosexuality (but didn't rescind criminalizing the behavior).

Looking at your list, I believe only one person from it has come into the previous 3 threads and stated that Jewish laws should still be enforced when it comes to punishing those caught and convicted of homosexual acts. When I questioned her further about what should be done to a 12 year old boy who was brutally molested as a child and out of confusion turned to homosexuality, she went silent.

Now that I've cleared that little smokescreen, tell us why children should continue to be physically, spiritually and emotionally molested; why invaluable institutions should continue to be destroyed and why morally confused people should be allowed to continue to destroy their lives with disease and misery, often times leading to an early death.

Do you see any sort of major backlash in the offing? Or will the Christian view go underground, or "into the closet", as it were?
Click to expand...

I dunno, what do you folks at the Marxist group Black Lives Matter think?

aCultureWarrior said:
I dunno, what do you folks at the Marxist group Black Lives Matter think?
Click to expand...

I'm not part of the BlackLivesMatter movement.

GFR7 said:
I'm not part of the BlackLivesMatter movement.
Click to expand...

With Malice Aforethought: LGBTQs and the criminal justice system
http://www.windycitymediagroup.com/...Qs-and-the-criminal-justice-system/42712.html

With Malice Aforethought: LGBTQs and the criminal justice system
http://www.windycitymediagroup.com/...Qs-and-the-criminal-justice-system/42712.html
Click to expand...

Have they stood for Sandra Bland? :think:

Too much identity politics; I'd rather have a unified fight against injustice which embraces all.

aCultureWarrior said:
, tell us why children should continue to be physically, spiritually and emotionally molested; why invaluable institutions should continue to be destroyed and why morally confused people should be allowed to continue to destroy their lives with disease and misery, often times leading to an early death.
Click to expand...

I ask those questions of you all the time.
why should children continue to be physically, spiritually and emotionally molested by practitioners of reparative therapy?

Status
Not open for further replies.