Voter fraud, the new Constitutional right of leftist democrats only 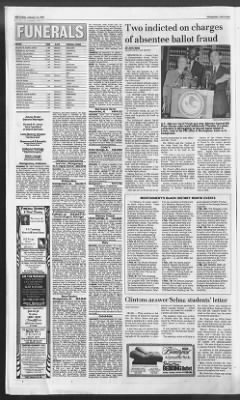 "If convicted, Smith, 42, and Tyree, 35, could be sentenced to five years each in prison and fined uo to $250,000.
The indictment against Smith and Tyree alleges they applied for and cast absentee ballots in the names of voters without the knowledge or consent of the voters.
The grand jury also accused Smith, who was first elected in 1994, and Tyree of using false addresses on applications so they would be sent to addresses "controlled by the conspirators."

We have already proven the democrats have been using dirty election fraud tricks for a hundred years or more, and are still using them to steal elections today. There were dozens of eye-witness allegations of crooks using false addresses on applications for absentee ballots in 2020, so that multiple numbers of ballots would be sent to fake addresses to be collected, filled out, and submitted by voter fraud crooks. The democrats were doing it 100 years ago, 25 years ago, and in 2020.

Democrat crooks also requested ballots for people who they knew would not be voting, including dead people, and filled out the ballots and submitted them as legitimate by fraud as well. They did that decades ago and are still doing it today.
You must log in or register to reply here.
Share:
Facebook Twitter Reddit Pinterest Tumblr WhatsApp Email Share Link
Top