Nobody, not even librarians at the National Archives, gave much thought whatsoever to government officials carrying some documents with them when leaving office. Democrats made this an issue because they wanted an excuse to steal documents Trump owned and was intending to use in just a matter of days (at that time) in his legitimate case against Hillary for slander, defamation, and inventing the lying leftist democrat Russian collusion conspiracy theory. But now that the dummies opened the can of worms, they are finding the worms eat democrats as well. How befitting. 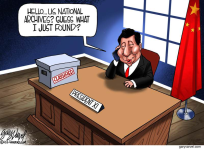 ok doser said:
They should search the documents at the Penn Biden center for the cover up of Tara Reade's rape
Click to expand...

I don't think Biden and his cronies intend to withhold the Biden records from the public forever, just maybe for 50 or 70 years or so, just as the government insiders are still withholding pertinent facts and documents from the public that pertain to the JFK murder.
You must log in or register to reply here.
Share:
Facebook Twitter Reddit Pinterest Tumblr WhatsApp Email Share Link
Top