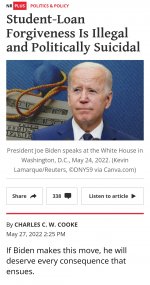 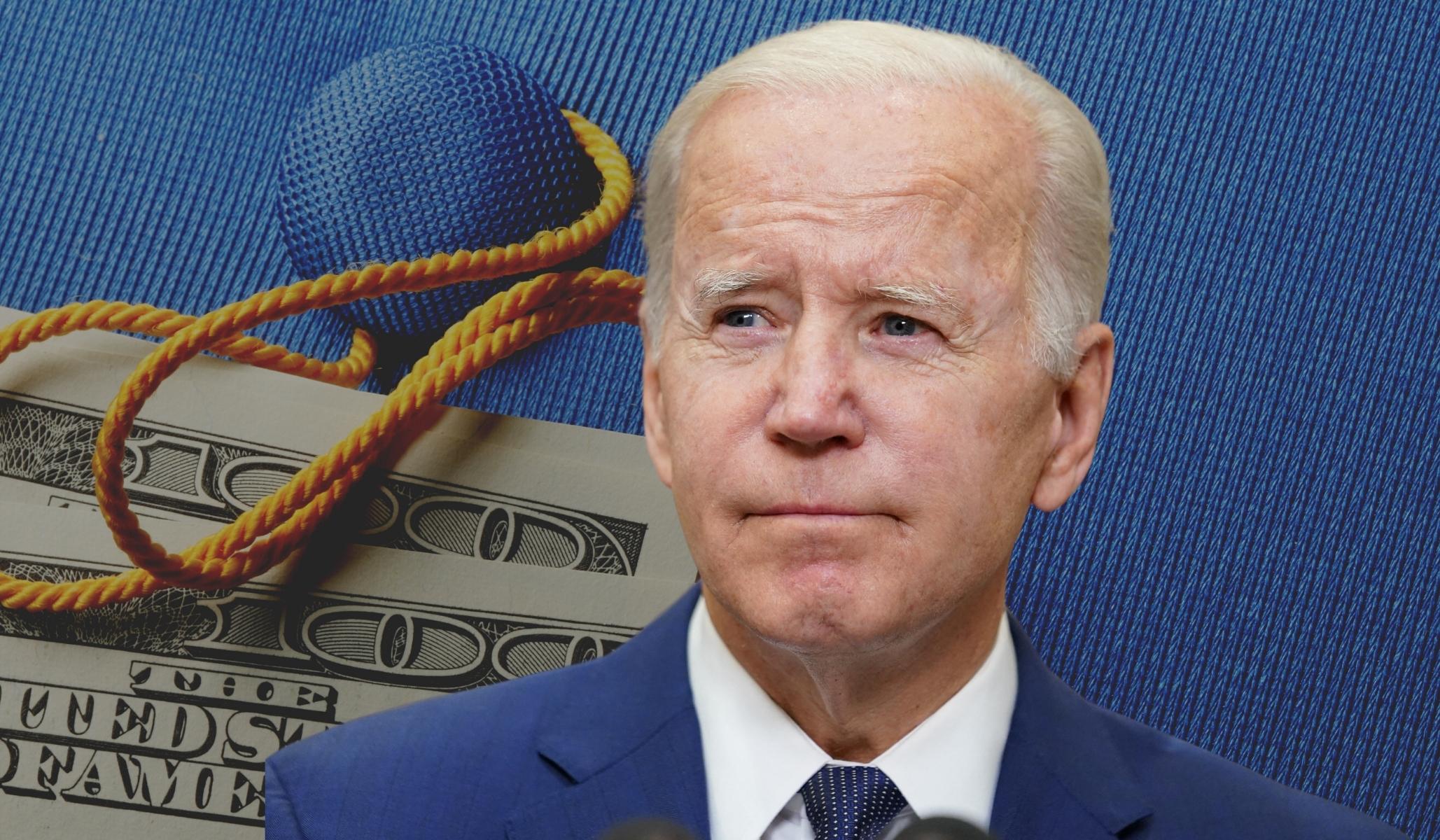 If Biden makes this move, he will deserve every consequence that ensues.

If the Washington Post is to be believed, Joe Biden is about to desecrate his oath of office in order to engage in an act of wanton political suicide that, in addition to making a mockery of his vow to uphold the law, will pit American against American, increase partisan resentments, further damage our already debilitated lawmaking process, and haunt the reputation and fortune of the arthritic Democratic Party for many years to come:

The White House’s latest plans called for limiting debt forgiveness to Americans who earned less than $150,000 in the previous year, or less than $300,000 for married couples filing jointly, two of the people said. It was unclear whether the administration will simultaneously require interest and payments to resume at the end of August, when the current pause is scheduled to lapse.
Click to expand...

This is illegal, and Biden knows it. The executive branch has no generalized power to forgive any amount of student debt for debt-holders of any income group. Asked about the idea last year, Nancy Pelosi confirmed simply that “the president can’t do it. That’s not even a discussion.” Do you know how patently illegal something has to be for Nancy Pelosi to acknowledge it’s illegal? The Department of Education came to the same verdict, determining that the executive branch “does not have the statutory authority to cancel, compromise, discharge, or forgive, on a blanket or mass basis, principal balances of student loans, and/or to materially modify the repayment amounts or terms thereof.” Put simply: If Biden wants to do this, he must get Congress to agree. If he tries to bypass Congress to do it anyway, the courts must stop him. And if they don’t, he must be impeached.
If a policy is illegal, it’s illegal whether it is deemed good or bad by the president and his apologists. But it is worth reiterating nevertheless that the policy Joe Biden is pursuing here is revolting on its own merits. Despite the best efforts of the corrupt and self-dealing figures who are selling it, there remains no case whatsoever for the transference of student debt from the people who incurred it to the people who did not, and there remain hundreds of cases against. It is entirely unnecessary: not only do college graduates have the lowest unemployment rate in the country, they have already benefited from a two-year delay in repaying their loans. It is an arbitrary, one-time-only deal that creates a host of perverse incentives, is deeply unjust to those who have repaid their loans, and makes structural reform even harder. It is inflationary in a period of catastrophic inflation, as all measures that throw money at the demand side of the economy must be. And it is regressive, in that it forces poorer and less-credentialed Americans to pay the debts of rich people who went to college, simply because those rich, college-educated people want their debts paid off, and because they are important enough to Joe Biden and his staff to get it done.
“Don’t tell me what you value,” Joe Biden likes to say. “Show me your budget, and I’ll tell you what you value.” Okay. How about impeachable offenses? Joe Biden is proposing to break the law in order to hand $200 billion to people who make up to $300,000 per household. What sort of “values” does that indicate, I wonder? Surely, if good ol’ Scranton Joe were going to tear up the Constitution and the statute book, he’d want to do it to help poor people, or to write off small-business loans, or to subsidize mortgages for people who are struggling to stay in their homes? A man who truly had values wouldn’t make a mockery of his office in the first place. But to do so to enrich wealthy graduate students and placate the insatiable corruption of his White House aides? That’s beyond belief.
Or, at least, it would be beyond belief if one hadn’t witnessed the perplexing trajectory of the Democratic Party over the last decade. Once, Democrats prided themselves on being for the little guy. Now, their primary interest is in creating an endless slush fund for the benefit of upper-middle-class Elizabeth Warren voters. If Biden makes this move, it will complete the party’s transformation. And, after that, he’ll deserve every damn consequence.

From the retarded children's side of the aisle: 'We Can Do Better' Than Biden's Paltry Student Debt Relief Plan, Says AOC

"Just enough to anger the people against it *and* the people who need forgiveness the most."

Banned
Joe is so senile I don't think he cares if its political suicide. The natural instinct of a democrat is to buy votes. The proposal would also place income limits on who can benefit from the debt forgiveness plan.

National Review on Biden’s student loan debt cancellation: ‘Wanton political suicide’ | In a new piece for the National Review, Charles C. W. Cooke argues that if President Brain-Dead Biden proceeds with the plan of canceling a large portion of feder

In a new piece for the National Review, Charles C. W. Cooke argues that if President Brain-Dead Biden proceeds with the plan of canceling a large portion of federal student loan debt, he will be committing “an act of wanton political suicide.” Cooke writes, “Brain-Dead Biden is about to...