Some truths about the left


For my birthday, I’ve written this letter…

To the Great Invisible and Unnameable Purveyors of our Culture,

Over the past few decades you have said that I need to listen to you more. “A time of listening” is what you and your disciples have demanded. The fact is, I have been listening. And, for most of my life, this is what I’ve heard from you:

[] I was told that my Christian faith is archaic, outmoded, hypocritical, abusive and oppressive. In the history of the world, Christianity has been a cancer on the collective brain, impairing education, medicine, science and civilization. You would stamp it out completely if you could. Then, to appear generous, you granted that I could have an innocuous version of my faith that is nothing more than a vague inspirational adornment; one that must never influence my actual thinking, worldview, priorities, or choices - and must never be confessed out loud.

[] If God ever existed, you proclaimed that He was dead. And then you made yourself the new god under the guise of education, science, commerce, and enlightenment.

[] You declared that absolute truth did not exist, then made your subjective truth absolute.

[] You praised individuality, even while you required conformity - and openly ridiculed individuals who were not your approved kind of different.

[] You promised freedom without responsibility, pleasure without consequences, affirmation without accomplishment, love without sacrifice.

[] Your artists used every means possible to tear down my values, my faith, and my cherished institutions, replacing them with vapid entertainment, unbridled consumerism, meaningless platitudes, and trendy whims.

[] You told me to imagine no heaven, no possessions, no countries, no religion, and I belatedly realized that you wanted me to imagine the absence of those things because you were slowly taking them away from me. With nothing to die for, there was little to live for. The brotherhood you promised has been a collective of sycophants that agree with you.

[] You praised our nation’s enemies, maligned our heroes, deconstructed our successes, and magnified our failures.

[] You lifted up hedonism, narcissism, self-indulgence, and egotism - and then you seemed bewildered when families and communities have broken down.

[] You created a culture of death and expected me to celebrate the ways you demeaned and disregarded human life.

[] You taught that I am merely part of the evolutionary food chain, a biological widget, with predetermined faults and programming, while also telling me that I can be whatever I wanted to be.

[] You viewed humanity like you do your technology: expendable and disposable. You have traded transcendence for obsolescence.

[] You offered no higher calling, no higher purpose to life, yet demanded the highest levels of allegiance to you.

[] You based “equality” not on our highest potential but on our lowest desires.

[] You mocked humility, purity, modesty, respect, good manners, and basic civility - and then acted astonished when we became indifferent or aggressive to others.

[] You weaponized tolerance, equality, diversity, inclusivity, law, and social order - all to create a chaos you believe you can control.

[] You became rigid and unforgiving, eliminating grace, mercy, and forgiveness from your ideology.

[] You promised peace as long as I surrendered.

[] You said you could fix everything if I gave you more power. When you were given more power, you fixed very little and wrecked even more, creating one crisis after another, and insisting on solving each one with the same failed solutions you’d used before.

[] You manipulated the needy and underprivileged to gain yet more votes, then did nothing for those people once you had their support.

[] You made me a victim and victimizer at the same time.

[] You demanded that the many must capitulate to your chosen few.

[] You suppressed discussion and debate with responses like “you’re stupid" and “shuttup.”

[] You lauded your intentions and ignored your ineffectiveness, as if meaning well was the same as doing well.

[] You declared that being male is the same as being a neanderthal; being female is to be a slave to the male, and being anything other than either of those two is noble and beautiful.

[] You promised that women would have equal opportunity and equal pay for equal work. Fifty years later, you have not delivered on that promise. Instead, you encouraged women to act like animals sexually, give their bodies away without love or intimacy, ignore their broken hearts, scarred souls, and blatant objectification. Blame men, you said. And rather than extol the virtues of self-restraint, purity, and abstinence, you handed out condoms, birth control, and abortion-on-demand - with no regard for the tragic consequences. You taught pro-choice, except for the choice to disagree with what your choices have done to them - and to all of us.

[] You said that equal rights, equal justice, and equal opportunity should be “color-blind.” But then you turned us into adversarial tribes - with no regard for talent, skill, intelligence, virtue, merit, ability, or common humanity - and have made color everything.

[] You said I was on the wrong side of history, and then you tried to eliminate history by poisoning the past.

[] You shame me for acts I did not commit, words I never said, thoughts I never had, and lies I do not believe.

[] You position your convoluted guesswork as infallible science - and say I am ignorant for doubting it.

[] You have made our entire educational system an indoctrination camp while claiming to applaud open mindedness.

[] You insist that we sacrifice now for the fearful possibilities you see in your crystal ball of data and tarot cards of statistics.

[] You make yourself the exception to the rules you require the rest of us to follow.

[] You expect us to reconcile your inconsistencies and accept your aberrations of behavior, though they have defied common sense and acted against human nature. You coerce us to accept your many contradictory proclamations, bow to your irrational worldview, and sit by passively while you attempt to engineer humanity yet again - and again - and again.

After all these years of listening, I’ve decided that you have nothing more to say that is worth hearing. I’ve seen little in you, your actions, or the world you’ve created that makes me want to follow you into the dark abyss you call the future. I have better things to do with what little time I may have left.

So, with all due respect, I'll say only this one last thing to you, the faceless entities that dictate our Culture: YOU'RE STUPID AND I WANT YOU TO SHUTTUP.

(There. I feel much better now.)
Click to expand...

What a deplorable exercise in hypocrisy and projection....

YOU'RE STUPID AND I WANT YOU TO SHUTTUP.
Click to expand...

annabenedetti said:
What a deplorable exercise in hypocrisy and projection.... 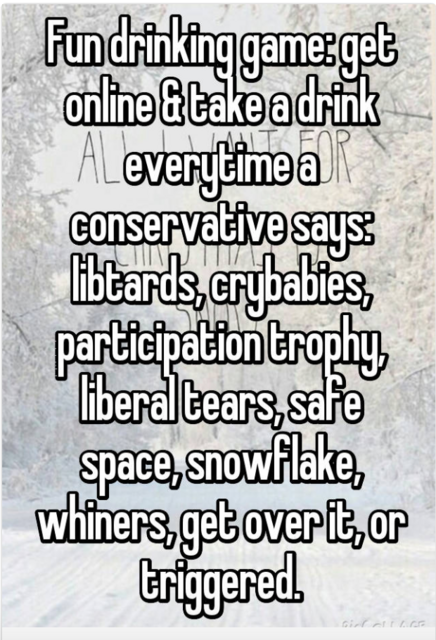 annabenedetti said:
What a deplorable exercise in hypocrisy and projection....
Click to expand...

Kind of sums it all up. Well said. :first: Today's winner, responding to todays whiner.

The Barbarian said:
Kind of sums it all up. Well said. :first: Today's winner, responding to todays whiner.
Click to expand...

Banned
Always count on G.O. to come up with something clever and original. WFTH-I

The Barbarian said:
Always count on G.O. to come up with something clever and original. WFTH-I
Click to expand...

Losers should always get a participation prize, according to leftists, so be happy you got one.

genuineoriginal said:
Losers should always get a participation prize, according to leftists,
Click to expand...

So you got yourself one. Nice. Anna got the 1st prize for the obvious reasons.

Instead of whining,try to put together an argument, next time.

annabenedetti said:
What a deplorable exercise in hypocrisy and projection....

It's kinda sadly hysterical isn't it? Sometimes, the projection of the far right is something to behold...