This Torah portion starts with somewhat a surprise, a promotion in rank for an execution committed, and rather suddenly. Pinchas, the grandson of Aaron was a Levite, and during the time of the “weakness and falling away of the men of Israel, He took matters into his own hands, and slew Zimri and Cozbi, who were committing fornication in the sight of all Israel, yet Adonai rewarded him for this and gave him an “everlasting covenant of peace and an everlasting priesthood” because he was “Zealous” for his God, because he made an “atonement” for “B’nei Israel”.

to understand this, we must go back to Parashah Balak. King Balak wanted Balaam to curse Israel, yet Adonai did not do this, as Adonai prohibited this. Israel was already blessed by Adonai, and who Adonai has blessed, no man can curse. However, as many past rabbis and sages believe, what happened afterwards was indeed a tragedy. Even though the Torah does not record this, because of the events that followed, we can conclude that this is what might have happened afterwards.

Perhaps, Balaam went to Balak and told him that even though he could not curse Israel, the children of Israel could bring a curse among themselves by disobeying God’s commandments and going after other gods. The Torah says that b’nei Israel went after the Moabite prostitutes and went to worship their god “Baal-Peor” thus bringing down the wrath of YHVH. The result was a plague that killed 24,000 Israelites until Pinchas took action and took a lance and thrust it through the bellies of Zimri and Cozbi, thus “staying” the plague. As Adonai called it, “making an atonement for the children of Israel’ “Blood” for “blood."

We can see that the same thing happened at Calvary, Yeshua made atonement for our sins, His death for our lives. The spear of Pinchas penetrated Zimri and Cozbi, while the Roman spear penetrated Yeshua's side. Also, the Roman nails penetrated the wrists of Yeshua, holding Him fast to the cross. The spear of Pinchas held fast Zimri and Cozbi to the ground, yet they were guilty as charged, while Yeshua was not guilty as charged, yet our guilt was charged to HIS account. The death of Zimri and Cozbi obtained life for the remainder of the Israelites when the plague was stopped. The death of Yeshua obtained life for ALL who believe.

The first commentary concerning this event is recorded in Psalm 106:28-31. David tells how the Israelites went after Ba'al Peor and ate sacrifices, thus angering Adonai, and as a result, a plague broke out among the people, yet Pinchas took action and executed judgment and the plague was halted.

We find this a very “rash” thing to do, yet, we need to understand that Israel was under a “theocracy” and not a “democracy”. Their ruler, King, and commander-in-chief was YHVH himself. God calls the shots, makes the rules and decides outcomes. Under our “democracy” we have presidents, kings, senate, governors, etc. who make rules and vote on rules and outcomes. Try being “zealous” for God today the same way Pinchas did would land us in prison very quickly.

Another thing we must remember is that we ALL have two natures, the “Yetzer Hara” (The evil inclination, or the sin nature) and the “Born again” spirit-filled nature that comes when we accept Yeshua as Messiah and LORD. Both live inside us, and some things can “trigger” that old sin nature and cause havoc and misery in our lives. In the case of the Israelite men, it was the arrival of the Midianite and Moabite prostitutes, and not only did they bring a curse upon the encampment of the Israelites, but they also brought death to 24,000 of the population.

Now, it seems like a large number, but if we realize that the Israelites probably numbered 2 or 3 million, then that number is quite small. We need to also realize that not ALL of Israel went after “Baal-Peor” only the ones that went after the prostitutes. One can also ask a question; “Can one change his or her nature of being?” To answer this question, we need to look at a story.

A king once had two sons. To test them, he asked them that question. The first son said; “Yes, one can change his or her nature.” Yet the second son said; “No, one can never change his or her nature. The king then said; “Go out and prove your statement, you have a week.” So, both sons when out, and after a week, they returned to the palace. The first son came near the king and queen with a large cloth bag. He put it on the floor and out came a cat. The cat was dressed in fine linen and had a servant’s hat. The cat got up and walked on its two hind legs and lifted a small silver tray towards the king and queen. On the tray were two chocolates. The king and queen smiled and marveled at the cat and accepted the two chocolates. Everyone applauded! How wonderful!

The second son said; “wait a minute.” He took a small cloth bag and emptied it on the floor and out ran 5 mice. When the cat saw the mice, it dropped the tray and ran after the mice on all four paws. “You see,” said the son, “the cat went back to its old nature, it only needed a “trigger”. You can dress a cat in fine clothes and teach it a few tricks, but it will always be a cat, and cats chase mice according to their feline nature.

We will always have our “old nature of sin” with us, and it will rear up its ugly head, as Rav Shaul (Apostol Paul) testifies in Romans 7:14-25. Only physical death will free us from the “old sin nature” Every day it is a constant battle. The spirit against the flesh and the flesh against the spirit.

Now back to the action of Pinchas. His faith and love for the Torah and for God were backed by “action”. We could take other examples. A cat lover walks by a group of mean kids that are teasing a cat, pulling its tail, and just giving it a hard time. The cat lover could just say; “poor cat” and start to cry over it and continue walking…or…the cat lover could run up to the mean kids and push them aside, grabbing the cat and taking it to safety. The cat lover not only showed love and compassion for the cat but also showed an active and positive “action”.

The same can be said about protesting against the murder of the unborn through abortions, many people will write letters and let their voices be heard, instead of just feeling sorry for the unborn who are murdered inside female wombs.

Later on, in this Parashah, we see that Moshe intercedes for Israel when Adonai tells him to go up Har Abiram and take a look around because he will die there. Adonai appoints “Yehoshua” as Moshe’s successor, to lead the people into the promised land. We see two leaders now, “Pinchas” who is granted the title and inheritance of “High Priest” for his action, he symbolizes the “Kana” (Zeal) for Adonai, and Yehoshua, who is given the “Ruach Elohim” to lead the people. Yehoshua is the same as “Yeshua” for HE is the one who leads US in our lives today. Yeshua also showed “Kana” when he drove out the money changers in the temple, he used a bit of violence, yet not for “religious” reasons, but for the “love” of HIS father and for respect for HIS HOUSE. Today HIS HOUSE consists of all “Kehilot” (assemblies) of born-again believers all over the world, not buildings. John 2:17 reads; "Zeal for your house has consumed me!"

There are other ways one can show “zeal” for YHVH today; Loving his Torah, obeying his commandments, teaching his Word to those who would listen, loving our neighbors, supporting our local body of believers, voting for government officials who also uphold biblical standards. Pointing out sinful ways to sinners (in a loving, not condemning way) and pointing them to a personal relationship with Yeshua our Messiah.

Chapters 28 and 29 deal with the review of the sacrifices and offerings that the Israelites would offer to YHVH. Remember that they are about to cross over the Jordan to possess the promised land. There they would be “permanent residents” and the fight would continue to cast out the Canaanites (another reason for the census) to see how many “fighting men” the nation consisted of. Each and every element of the offerings and sacrifices illustrates who YESHUA is and what he stands for;

2 lambs per day, fine flour with oil; Yeshua who is the Lamb of God, who is the BREAD of Life, who has the Ruach HaKodesh (The Holy Spirit) within him. The oil symbolizes the Spirit of Elohim, and the “anointing by the Spirit on ALL believers. Wine was also used to pour over the sacrifices, the “wine” symbolizes the blood of Yeshua that ran down the cross, out of his veins for atonement for all who believe and accept his sacrifice for sin.

Bullocks were also sacrificed, the bullock symbolizes “strength” as the ancient symbol of the letter “Aleph” was in the form of a bull. Adonai is “strength” yet he allowed himself to become “lower than the angels” to walk as man and be a willing sacrifice for sin. The goats remind us of Yom Kippur, one was set free and the other sacrificed, reminding us that our sins were “cast away” from us as well as dealt with on the cross. The sacrificed rams remind us of the “ram” that was in the thicket when Abraham offered his son Isaac as a sacrifice. That ram was sacrificed instead of Isaac, just as Yeshua was offered as a blood sacrifice in our place.

It was His sinless blood, for our sinful blood. Do you accept His sacrifice? if yes, you are on the winning side.

A page from my 1968 Jr. High Yearbook, where's Ben Avraham? first guy, first row on the right. Next to my friend Bennetta. We still write each other. She sent me this page last month. 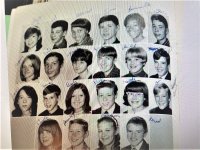