How can large land animals from one alleged time period be found buried alongside large ocean creature fossils from an assumed different age? According to evolutionist cultists, animal remains could possibly have been washed down from land into coastal areas to be buried with large sea creatures, and, also speculated by evolutionist cultists, hurricanes could have disturbed fossil remains from one era and buried them alongside fossils from a later era. How convenient, if also extremely speculative and unscientific. But that is what we get with evolution: unscientific speculation not irrefutably demonstrated by facts and evidence. 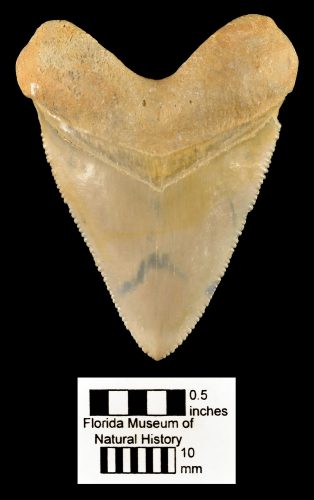 Palmetto Fauna University of Florida Vertebrate Fossil Locality PO005, along with over 85 individual mines or specific areas within mines. A list of mines and their locality numbers provided below.…

www.floridamuseum.ufl.edu
Careful excavation of in situ deposits such as the Palmetto Mine Microsite and the Whidden Creek Site demonstrate that marine and freshwater/terrestrial fossils are truly found together in the same deposits and not mixed up by mining activities. How can the remains of such ecologically different animals be found in the same deposit in such large numbers? One possible scenario is that carcasses and bones of land and freshwater-inhabiting species are transported by rivers to nearshore marine environments such as a bay, where they become buried in sediment along with the remains of marine species living in the region.
G

When fossils are found, what usually happens ? Paleontologists will then create a fanciful story or individual interpretation about them (such as finding some teeth, piece of a skull, etc), using a fertile imagination, drawing a picture of how they felt the animal (or whatever) looked like they were part of (based on perhaps just one tooth), how old they are through carbon 14 dating, using the radiocarbon clock as a means to establish the "epoch" (or millions of years ago) in which it supposedly lived, based on the decay of isotopes which can be altered to appear older by major events.(such as the Global Flood: Note: carbon 14 is unstable and has a half life of 5,370 years, while carbon 12 is stable that never undergoes radioactive decay)

It is like taking a bolt and then drawing a picture of it as part of a car, depicting it as a blue car with fins and power brakes, but it could have been part of a truck, or even part of an appliance, or even completely something else, and then much of the public accepting this as "fact" without so much as a whimper.

For example, the Piltdown Man of 1912. For about 40 years it was accepted as genuine by most of the evolutionary community. Finally, in 1953, the hoax was uncovered when modern techniques revealed that human and ape bones had been put together and artificially aged and perpetrated by A. C. Hinton, a former curator of zoology at London’s Natural History Museum, who died in 1961.

Or the "Man of Orce" that was found near Orce, Spain in southern Spain (Andalusia) and jumped to national headlines in 1983. Prominent Spanish, French and British scientists had already vouched for its authenticity. However, on May 12, 1984, two weeks before an international seminar on the subject was to occur, serious doubts arose as to the fragment's origin. After the meticulous removal of calcareous deposits from the interior part of the skull, paleontologists found a disconcerting "crest". Human skulls do not have such a crest. The seminar was quickly postponed.

Despite the fossil’s meager proportions, the “Man of Orce” was hailed as “the greatest paleontological find of recent years, as well as the missing link between the typical African man (Homo habilis) and the oldest man of the Eurasian continent (Homo erectus).”

Fertile imagination and not-so-scientific guesswork sufficed to fill in the details about the appearance and way of life of the “Man of Orce.” Finally, in 1987, a scientific paper written by Jordi Agusti and Salvador Moya' , two paleontologists involved in the original discovery, said that x-ray analysis had indeed confirmed that the fossil belonged to a kind of horse, not a man.(the latest information says that it "was most likely a skull fragment from a four-month-old donkey")

On the other hand, what the Bible says can be taken as "the truth", for details have been established as true, such as locations (ancient Babylon in 1899, tunnel of Hezekiah, 2 Kings 20:20, found in 1867), events (such as the fall of ancient Babylon through the Nabonidus Chronicle, unearthed in the 19th century, see Isa 13:19, 20), people (such as David, mentioned over 1,000 times in the Bible, was established as real through archaeology by Professor Avraham Biran of Hebrew University of Jerusalem near the ancient town of ancient Dan above the sea of Galilee in 1993, or Pontius Pilate, governor of Judea (John 18:29), whose inscription was found on stone steps of a Roman theater in Caesarea in 1961, or the name of Evil-merodach at 2 Kings 25:27 was found on a vase at Susa, Elam)
You must log in or register to reply here.
Share:
Facebook Twitter Reddit Pinterest Tumblr WhatsApp Email Share Link
Top