An Introduction to Deuteronomy (an overview) Chapters 1-3


We start the final book of the original 5 books of the Torah, in which Moshe wrote down all the statutes, commandments, precepts, details, etc. that Adonai dictated to him to write. We must remember that Am Israel received the first 10 commandments directly from the mouth of Adonai, written down in stone, and given to the people, as a form of “Ketubah” or “marriage contract. Later, Adonai called Moshe back up to the mountain and there, dictated the rest of Torah, the rest of the 603 commandments which he wrote down on the scrolls.

603 were written down by Moshe, yet dictated by Adonai, and 10 were dictated and written by YHVH himself. All in all, we must conclude that ALL the TORAH comes from YHVH, whether directly or indirectly written. This book of Deuteronomy is the last. Moshe began writing it, and it was probably finished by Yehoshuah (Joshua) or another leader.

The book relates the travels and experiences that “Am Yisrael” took and went through in 40 years’ time. Moshe retells the experience somewhat as a father would relate to his son. Let’s say that father and son travel across the USA for 6 months, then, perhaps 10 years later, the father would remind the son of their trip by remembering their “experiences” “Remember son, the time when we were traveling through Texas and, well, you insisted in exploring that abandoned house, even when I said it would NOT be a good idea…….”

An interesting midrash is the difference and similarity between two words; “D’varim” (words) and “D’vorim” (bees) One could say that the words that Moshe spoke to the Israelites were like the “stings of bees” and after giving this message, a little later on, Moshe went up Mt. Pisgah a died, just like when a bee stings, it leaves the stinger in the victim and dies.

What can we learn from the beginning of D’varim? Are we mature enough to receive rebuke? From elders? From others who are in authority? When a believer or even a non-believer is rebuked, it is for his or her own good, either to bring that person to the knowledge of Messiah Yeshua or to turn that person from error to walk in harmony with the Torah.

I think that we can ALL relate to the Children of Israel. At one time or another, we have ALL gone astray, doing our own thing, knowing that "this and that" is sinful, yet we go ahead and do it anyway. Maybe it makes us feel good, a moment of pleasure, then the guilt sets in. We need to refer to the 5 words that start with "R": Rebuke, Repent, Return, Renew, Restore.

The Word of God rebukes us with the "Word" itself, sent by the "Living WORD'. This leads us to "repent" and "Return" (Shoov) and thus we make "Teshuvah" which means; "turn around and go the other way, back to God." Then, we have a "renewed relationship" with our creator, and we have "restoration." God rebukes, We repent, We return, God renews our relationship and restores us.

Moshe tells the people the words of Adonai: “YHVH your Elohim spoke to us in Horeb saying “You have dwelt long enough in this mountain…turn you and take your journey…. (1:6)

It is interesting that the word “Horeb” is written without a “vav”. The word “Horeb” in Hebrew has only three letters; “Chet” “Resh” and “Beit”. These are the same letters that spell out the word “Sword” which is “Cherev”. So we have “Chorev” and “Cherev” The only difference is the vowels “o” and “e”. Is there a “Remez” here? A symbolism? The sages say that in a way, Moshe is telling the people; “You have received the Torah at “Chorev” now, continue on towards the Promised Land, the Land of Canaan, and put into practice the Torah. If you disobey, a curse will fall upon you and the “Cherev” (the Sword) will pursue you. So, it is either “Obedience” which you learned from the Torah at “Chorev” …or…the “Cherev” will destroy you for “disobedience”.

Now, the Israelites were right at the border of Moab and Canaan; the Jordan River separated the two nations. It was time to leave their “comfort zone” and “cross over” and conquer the pagan peoples, and lay claim to the land! They had fought giants before, you know, the bigger they are, the harder they fall, especially if Adonai “falls” them.

Remember that it all starts in Egypt (Mitzraim) the land of “restriction”, Moshe leads them out, symbolizing a sort of Messiah, leading them to Mt Sinai, they receive the Torah, for 40 years they undergo instruction, go through both “good times” and “bad times” sometimes, “very bad times” when YHVH chastised and killed many of them for disobedience and rebellion. Yet now, it is time for the promise to be fulfilled, the “Promised Land”

We go through the same thing in our lives. We start out being liberated from our “Egypt” we are liberated from the “lost world and the ways of the lost” by accepting Yeshua as our Messiah and LORD. We grow in faith, in spiritual maturity, or…perhaps fail in our relationship with YHVH, going through valleys and dark places, yet always emerging into the light of Torah again. Sometimes we get comfortable in one place, or doing one thing, yet, God is saying…” turn now and take your journey” or “continue your journey and continue to grow in faith, expose yourself to different “stuff” “situations” yet always trusting in HaShem.

The dawning of a new day. This is a new day to serve the LORD. 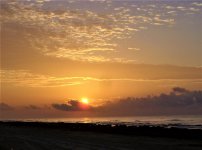 BenAvraham said:
Now, the Israelites were right at the border of Moab and Canaan; the Jordan River separated the two nations. It was time to leave their “comfort zone” and “cross over” and conquer the pagan peoples, and lay claim to the land! They had fought giants before, you know, the bigger they are, the harder they fall, especially if Adonai “falls” them.
Click to expand...

I appreciate your article and summary. A theme in this portion of Deuteronomy is "Dealing with Giants". Despite the encouraging and faithful words of Joshua and Caleb 38 years previously, the report by the other 10 spies resulted in the failure by that generation, and a significant part of this was the fear of the Giants and the Walled Cities.

Moses gave his first speech and this speech is bookmarked by the following verses:
Deuteronomy 1:3–4 (KJV): 3 And it came to pass in the fortieth year, in the eleventh month, on the first day of the month, that Moses spake unto the children of Israel, according unto all that the LORD had given him in commandment unto them; 4 After he had slain Sihon the king of the Amorites, which dwelt in Heshbon, and Og the king of Bashan, which dwelt at Astaroth in Edrei:

Deuteronomy 4:45–49 (KJV): 45 These are the testimonies, and the statutes, and the judgments, which Moses spake unto the children of Israel, after they came forth out of Egypt, 46 On this side Jordan, in the valley over against Bethpeor, in the land of Sihon king of the Amorites, who dwelt at Heshbon, whom Moses and the children of Israel smote, after they were come forth out of Egypt: 47 And they possessed his land, and the land of Og king of Bashan, two kings of the Amorites, which were on this side Jordan toward the sunrising; 48 From Aroer, which is by the bank of the river Arnon, even unto mount Sion, which is Hermon, 49 And all the plain on this side Jordan eastward, even unto the sea of the plain, under the springs of Pisgah.
Moses was going to encourage Joshua and the children of Israel to cross the Jordan and enter the Land of Promise and defeat the Giants and possess the Land. What Moses with Divine guidance decided to do was to conquer two territories on the East of the Jordan as an example of how they could be successful with God's blessing when they entered the Land. This conquest of Sihon and Og and their territories becomes the basis for Moses' encouragement in his speech to Joshua and Israel. One example of this is in Deuteronomy 2:24-37 for the conquest of Sihon, and Deuteronomy 3:1-11 for the conquest of Og. It is also significant that the cities in this second reference concerning Og were High Walled Cities, and yet they had overcome them, and this is a reminder of one aspect of the evil report by the ten spies. The other aspect of the evil report is matched by the fact that they had also overcome Og, who was a Giant.

Another aspect of the theme is that when God purposes to give a land to a nation for an inheritance, Giants and City Walls are in no way an impossible impediment. When Israel journeyed up on the Eastern side of Jordan, they needed to pass through the Lands of Edom, Moab and Ammon. God had instructed Israel not to fight against these three nations, as God was not going to give Israel their Land. Hence it is God who decides who inherits a particular Land, and God had determined to give Israel the Land of Promise, known then as the Land of Canaan.

The following appears to be a summary of the theme of this section:
Deuteronomy 3:21–22 (KJV): 21 And I commanded Joshua at that time, saying, Thine eyes have seen all that the LORD your God hath done unto these two kings: so shall the LORD do unto all the kingdoms whither thou passest. 22 Ye shall not fear them: for the LORD your God he shall fight for you.

This lesson of “Dealing with Giants” is an example of how we can deal with Giants, that is large difficulties in our life and walk.