A federal jury awarded Republican Roy Moore $8.2 million in damages Friday after finding that a Democratic super PAC defamed him in an advertisement during the 2017 U.S. Senate race in Alabama.


Conservative Roy Moore had won the Senate primary. Democrats then set out to destroy his candidacy.​

Judge Roy Moore
Jurors found the Senate Majority PAC made false and defamatory statements against Moore in the ad that attempted to capitalize on a sexual misconduct accusation made against Moore during the 2017 race, Yahoo News reports.
The problem began after a woman came forward to The Washington Post and said Moore sexually touched her in 1979 when she was 14 and he was a 32-year-old assistant district attorney. There was no evidence.
Moore denied the accusation.
Other women said Moore dated them, or asked them out on dates, when they were older teens.
Again, no evidence.
The lawsuit centered on one television commercial that recounted accusations against Moore in various news articles.

Moore’s attorneys argued the ad falsely claimed he solicited sex from young girls at a shopping mall, including another 14-year-old who was working as a Santa’s helper, and that resulted in him being banned from the mall.

Judge Roy Moore has other lawsuits, one against Sacha Baron Cohen. A judge threw out the Cohen lawsuit and he is trying to have that decision reversed.

“We’re very thankful to God for an opportunity to help restore my reputation which was severely damaged by the 2017 election,” Moore said in a telephone interview.
The verdict by this jury of regular people of the state of Alabama represents a great legal victory over those who will say and do anything to capture an election including dragging the name of a good man through the mud to destroy a hard earned reputation. The facts of this case were so egregious that the jury quickly found actual malice against the Senate majority super PAC. God’s truth and justice won the day for Judge Roy Moore,” said Jeff Wittenbrink, Moore’s attorney, in a press release.
Everyone was out to get him. By the time the election came up, Alabamans voted for Progressive Democrat Doug Jones who ran pretending he was a moderate. 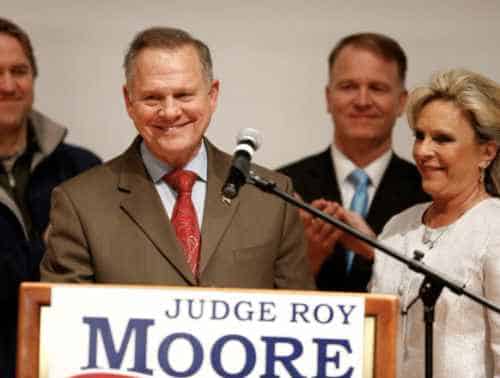 A federal jury awarded Republican Roy Moore $8.2 million in damages Friday after finding that a Democratic super PAC defamed him...