We have an incompetent bumbling demented old fool for a President. Embarrassing and dangerous!

Banned
Do we want to belittle and cheapen the process the way Dems did with their fake impeachments?

It's a bold strategy Cotton 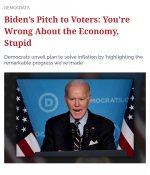 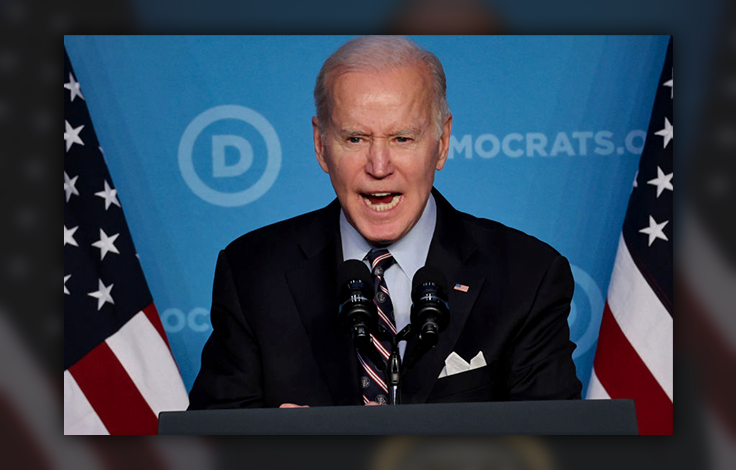 Biden's Pitch to Voters: You're Wrong About the Economy, Stupid - Washington Free Beacon

President Joe Biden and the Democratic Party finally have a plan to get inflation under control and address the economic anxiety felt by millions of Americans. It's not a plan in the conventional sense, but rather a public relations campaign to convince the American people that "despite their... 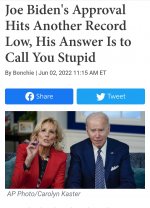 Joe Biden has hit a brand new low in approval, not just in a single poll that someone could claim is an outlier, but in the overall average. RealClearPolitics now has the president clocking in at -14.9 percent net job approval with a topline result of just 40.0 percent. 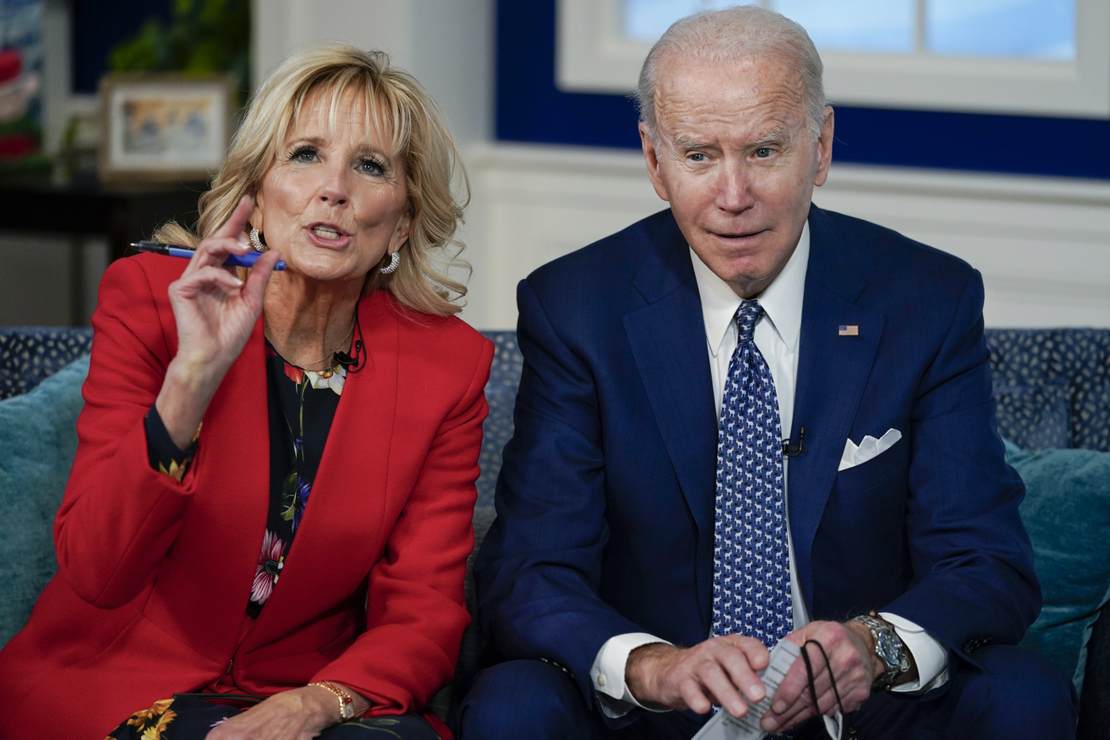 Joe Biden's Approval Hits Another Record Low, His Answer Is to Call You Stupid

It's a bold strategy. Let's see how it works out for him.

ok doser said:
View attachment 3550
Joe Biden has hit a brand new low in approval, not just in a single poll that someone could claim is an outlier, but in the overall average. RealClearPolitics now has the president clocking in at -14.9 percent net job approval with a topline result of just 40.0 percent.

Joe Biden's Approval Hits Another Record Low, His Answer Is to Call You Stupid

It's a bold strategy. Let's see how it works out for him.

He is a disgrace

Steve Hilton: Has there ever been a more pathetic excuse for president?​

Steve Hilton: Has there ever been a more pathetic excuse for president?​

Worst President ever. Not by a small margin, but by at least an order of magnitude.

You might almost feel sorry for the guy if not for the destruction he is wreaking upon my country.

Biden’s base abandoning him: Youth, women, minorities, and unions​ 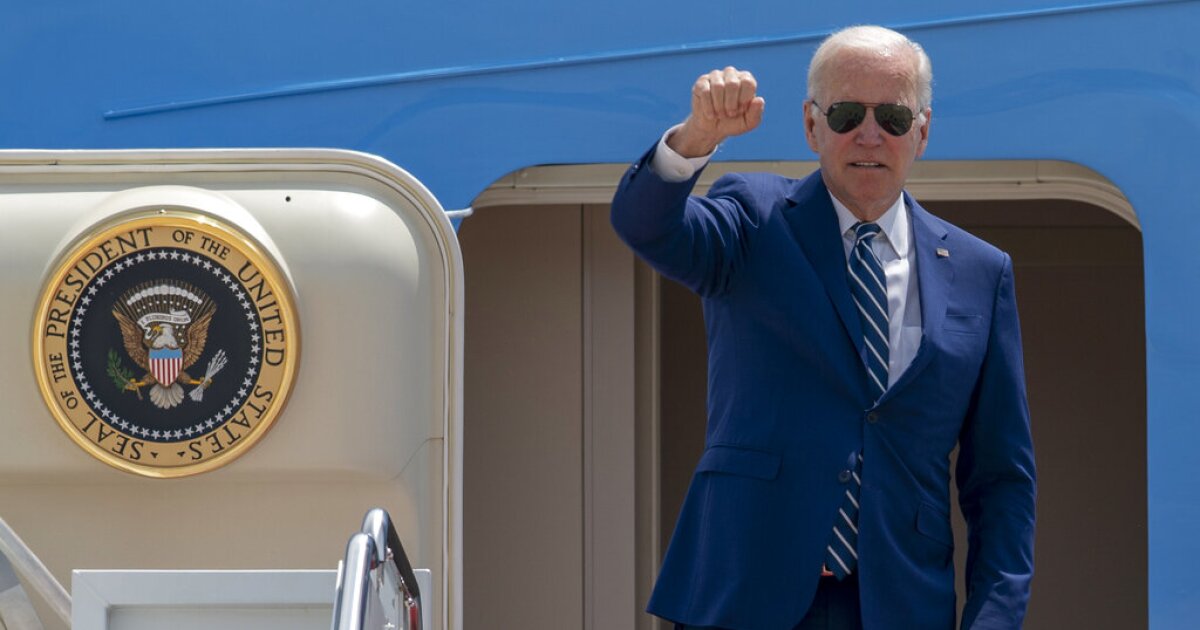 Biden’s base abandoning him: Youth, women, minorities, and unions

President Joe Biden will need a lot more than a plea of “C'mon man” to bring his base back.

If Biden Intended To Destroy America, What Would He Be Doing Differently?​

‘Deliberate and intentional. Two words you can expect Republicans to utter a lot more as they make the case that what ails America now isn’t an accident. It’s Joe Biden’s design."

That’s how Just the News’ John Solomon characterizes the shift in tone among Republicans in the runup to the midterm elections this fall. The leftist media is sure to attack this sort of language as crazy and dangerous QAnon conspiracy talk.

But ask yourself, what would Biden be doing differently if his goal was to purposely send the country into a tailspin?

He set off a 40-decade-high inflation spiral with his $2 trillion “rescue” plan. He exacerbated supply-chain problems by paying people not to work. He threw open the borders to millions of illegal immigrants. He needlessly kept COVID mandates and restrictions in place. He worsened shortages of baby formula and spiking gasoline prices. He encouraged foreign adversaries with his disastrous Afghanistan retreat.

In every instance, Biden has said he and his top officials were “caught off guard.” In other words, his is pleading incompetence. The public has picked up on this, which is why most Americans now believe that “incompetent” is the word that best describes this president.

But incompetence doesn’t do Biden justice. In every case, Biden knew, or should have known, what would happen if he pushed his policies. Yet he did so anyway.

On inflation, even liberal economists were warning that Biden’s reckless $2 trillion “rescue” plan – which he signed after the economy had already roared back to life – would set off a ‘70s-style inflationary spiral.

Biden ignored the guy who’d served as chief economist during the Obama-Biden administration and whom Biden has called “my good friend Larry Summers.”

So, is the inflationary spiral an example of Biden’s incompetence, or did he deliberately press ahead with his “rescue” plan knowing it would fuel price increases, perhaps in hopes that “fighting” inflation would justify still more government interventions?

How about the Afghanistan debacle that left 13 American soldiers dead and who knows how many Americans stranded under Taliban rule? Biden repeatedly claimed that nobody could have predicted how fast the Taliban would take over the country once the U.S. announced its pullout.

Except, that’s not true. Biden’s withdrawal came despite the advice of his top military commanders, who said that the U.S. should leave a force of 2,500 in the country.

“I was present when that discussion occurred, and I am confident that the president heard all the recommendations and listened to them very thoughtfully,” Gen. Kenneth “Frank” McKenzie, commander of the U.S. Central Command, told the Senate Armed Services Committee last September.

Biden ignored these commanders and then said he didn’t remember being told that.

So, was the bloody Afghan withdrawal – which likely encouraged Putin to invade Ukraine, and China to ramp up threats against Taiwan – due to Biden’s incompetence, or was it an intentional effort to weaken America’s standing in the world?

On the baby formula shortage, Biden again pleaded ignorance. Nobody told him until April that chronic shortages were threatening the lives of newborns, he said.

That, too, is a lie. There were a multitude of articles published in the months before about the growing shortages, and industry officials warned the White House back in February that shutting down a major baby formula production facility would be disastrous.

“I almost couldn’t believe what I was hearing,” one Democratic strategist told Yahoo News. “He has to show that he’s on top of these situations.”

And then, in the middle of this crisis, the Biden administration decided to ship pallets of baby formula to the border to make sure that illegal immigrants held in border detention facilities were well cared for.

Again, we ask, incompetence or something more nefarious?

Speaking of the border, the press has been dutifully reporting, as CNN did in March 2021, that “the border problem caught the Biden team off guard.” But that’s not true, either. Plenty of people were sounding the alarm that Biden’s open border talk would generate a flood of illegal immigrants.

But any suggestion that throwing the borders open was politically motivated, that it was part of the left’s plan to import vast numbers of future Democratic voters, is immediately attacked as racist “Great Replacement” nonsense, the kind that supposedly prompted Peyton Gendron to kill 10 people in Buffalo, N.Y.

But is it a baseless conspiracy? Democrats have barely hidden their desire to turn millions of government-dependent illegal immigrants into voting citizens by granting them amnesty. Letting millions more pour over the border now will only make amnesty that much sweeter down the road.

Don’t believe it? Here’s what the liberal Politico news site reported in 2013 about a bill that would have “reformed” immigration by, among other things, granting amnesty to 11 million illegals said to be in the country at the time.

“The immigration proposal pending in Congress would transform the nation’s political landscape for a generation or more – pumping as many as 11 million new Hispanic voters into the electorate a decade from now in ways that, if current trends hold, would produce an electoral bonanza for Democrats and cripple Republican prospects in many states they now win easily.”

So was the Biden border crisis another surprise, or was it intentional?

How about spiraling gasoline prices, yet another area where Biden has been supposedly caught unaware, but that his policies regarding fossil fuels helped spur? Biden keeps claiming to be working on a solution, such as by releasing oil from the Strategic Petroleum Reserve, a move he repeatedly insists will ease pain at the pump.

But an analysis of oil prices and gasoline prices shows that they reached new highs shortly after each release.

In this case, Biden gave the game away, telling a Japanese audience that skyrocketing energy prices are part of the plan to force the nation off fossil fuels.

“When it comes to the gas prices,” he said while visiting Tokyo, “we’re going through an incredible transition that is taking place that, God willing, when it’s over, we’ll be stronger and the world will be stronger and less reliant on fossil fuels.”

So how much of a stretch is it, exactly, to believe that all these other crises are part of Biden’s (or his handlers’) plan to “transition” the country into some sort of socialist Nirvana?

If Biden Intended To Destroy America, What Would He Be Doing Differently?

How much of a stretch is it to believe that all these crises are part of the White House’s plan to “transition” the country? 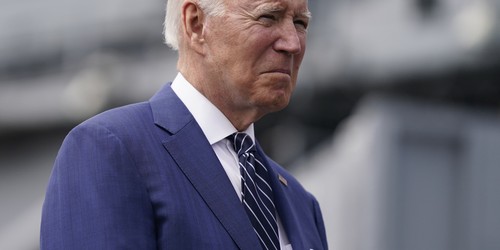 Among the last 11 national polls aggregated by Real Clear Politics, President Joe Biden's job approval has dipped into the 30's in seven of them. His "best" number is 43 percent. On average, Biden is nearly 16 points underwater, with his average approval falling below 39 percent. Quinnipiac's data was especially gruesome for Biden last week, but this latest survey from Civiqs -- which measures Biden's numbers in each state, with more than 200,000 overall respondents -- is even worse. 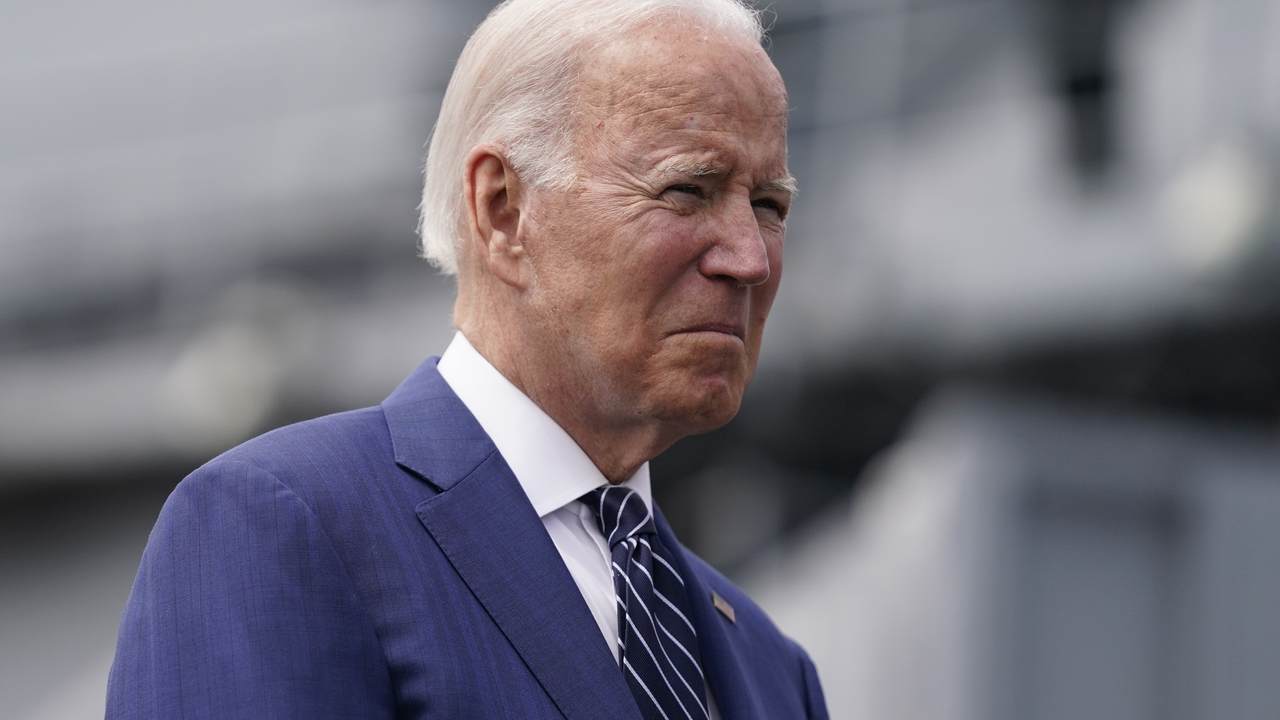 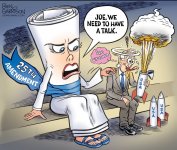 
At this point what else can he do? 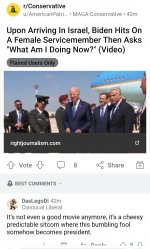 Things are getting really weird man 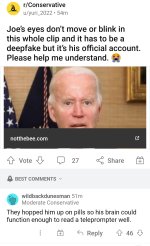 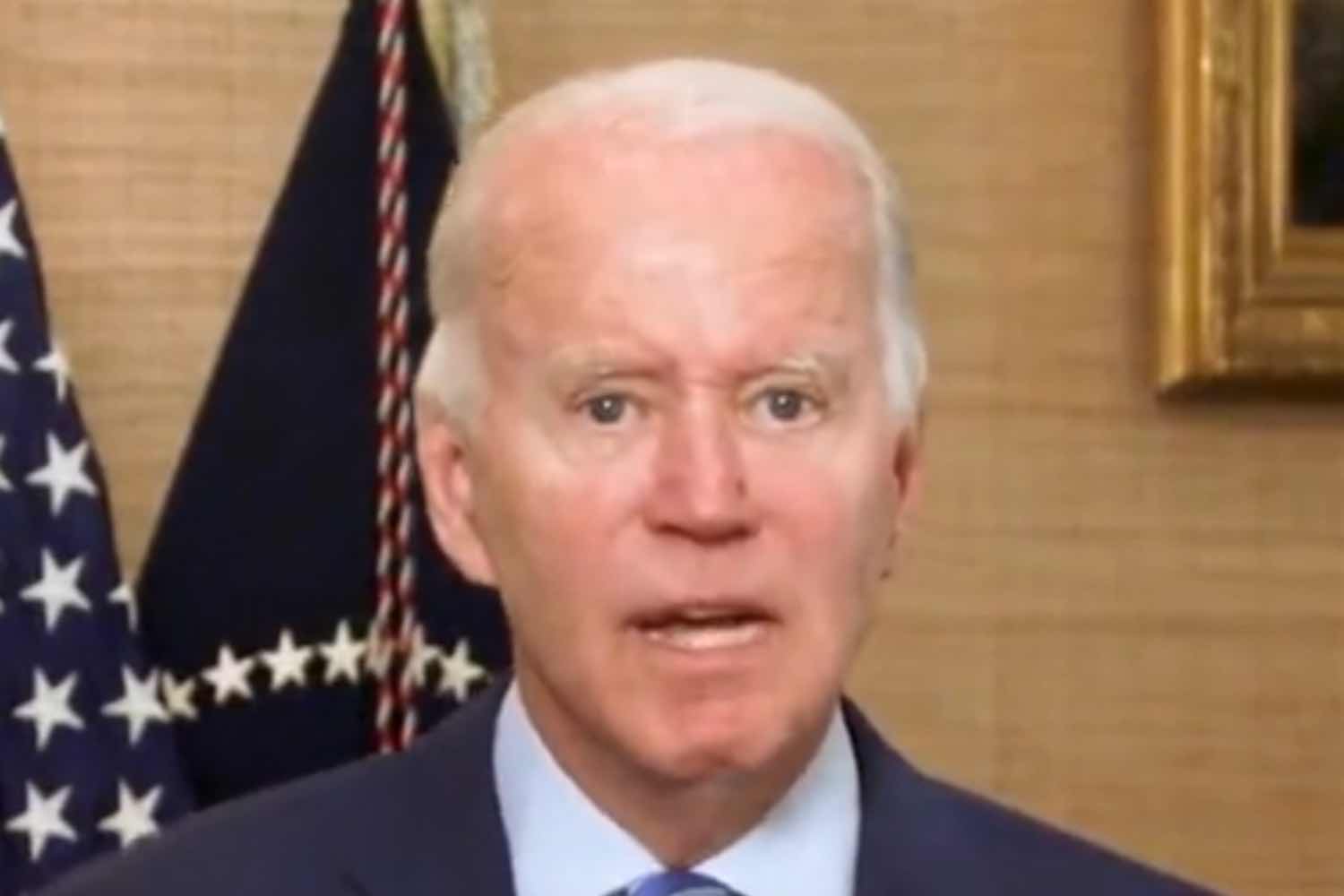 Joe’s eyes don’t move or blink in this whole clip and it has to be a deepfake but it’s his official account. Please help me understand. 😭

When your leader is a bumbling dud, reinvent him as a cartoon character.

How long do you suppose before we will no longer see the real Joe Biden on screen but only this manufactured image?