Are we winning the war on ISIS & Radical Islam?

Banned
[Are we winning the war on ISIS & Radical Islam? The President says yes. The experts say no. Here’s a 9-page fact sheet laying out the data. By Joel Rosenberg Washington, D.C.] "Fifteen years after the United States was attacked by Osama bin Laden and the jihadists of al Qaeda, a mere 27% of Americans believe we are safer from the threat of terrorism today than we were on 9/11.

Remarkably, fully seven-in-ten Americans believe we are not safer, or aren’t sure, according to a new Rasmussen poll released this week.

These are stunning numbers, especially when you consider the fact that President Obama and senior administration officials keep telling us that the most dangerous terror force on the planet — the Islamic State — has been “contained” and that ISIS is “losing” and that “we are winning” the war on ISIS.

Over the last month, I’ve been reviewing all manner of data, trying to understand why the administration keeps claiming that we’re winning. But any way you slice it, the cold, hard fact is this: the ISIS threat is steadily metastasizing.
•ISIS has more fighters than ever before.
•ISIS is recruiting these jihadists from more countries than ever before.
•ISIS is pulling off attacks in more countries than ever before.
•ISIS is killing more people than ever before.
•ISIS now has chemical weapons, is producing chemical weapons, and is using these weapons on the battlefield.
•Indeed, the very terror organization President Obama called a “JV team” and not a serious threat in January 2014 is now officially recognized by Congress and his own administration as an entity actively engaged in outright genocide..." Full text: Are we winning the war on ISIS & Radical Islam? The President says yes. The experts say no. Here’s a 9-page fact sheet laying out the data. Mt 24:6

...Why are: US, British, Israeli, Turkish, Saudi and Qatar secret officers are working inside Syria with ISIS and other rebel and mercenary groups? Eze 38:4

War of Gog and Magog :Nineveh:
Wars & Rumors of Wars

Syrian Politician to Sputnik: 'WWIII Has Begun, and It's Being Fought in Syria'

LIFETIME MEMBER
Hall of Fame
Not when that pedophile Obama waives the white flag.
C 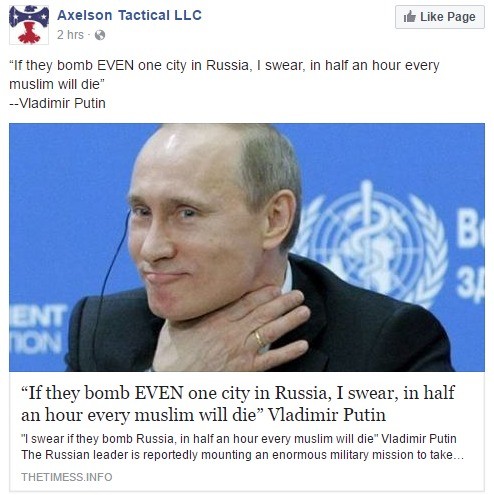 Nick M said:
Not when that pedophile Obama waives the white flag.
Click to expand...

He is not a paedophile nor has he surrendered in any sense of the word. You, however, obviously suffer from Obama Derangement Disorder.